Hi ho hi ho back on the road we go…  and so it was on this Saturday night in August when the rock band Parousia set out on empty highway and country road on a journey to a faraway land.  ‘The magical kingdom’ of Darien Center, NY.  The club we were performing at wasn’t too far away from Darien Lake Amusement Park, which back in 1981 was owned and operated by Six Flags.  (Six Flags sold the property in 2007). 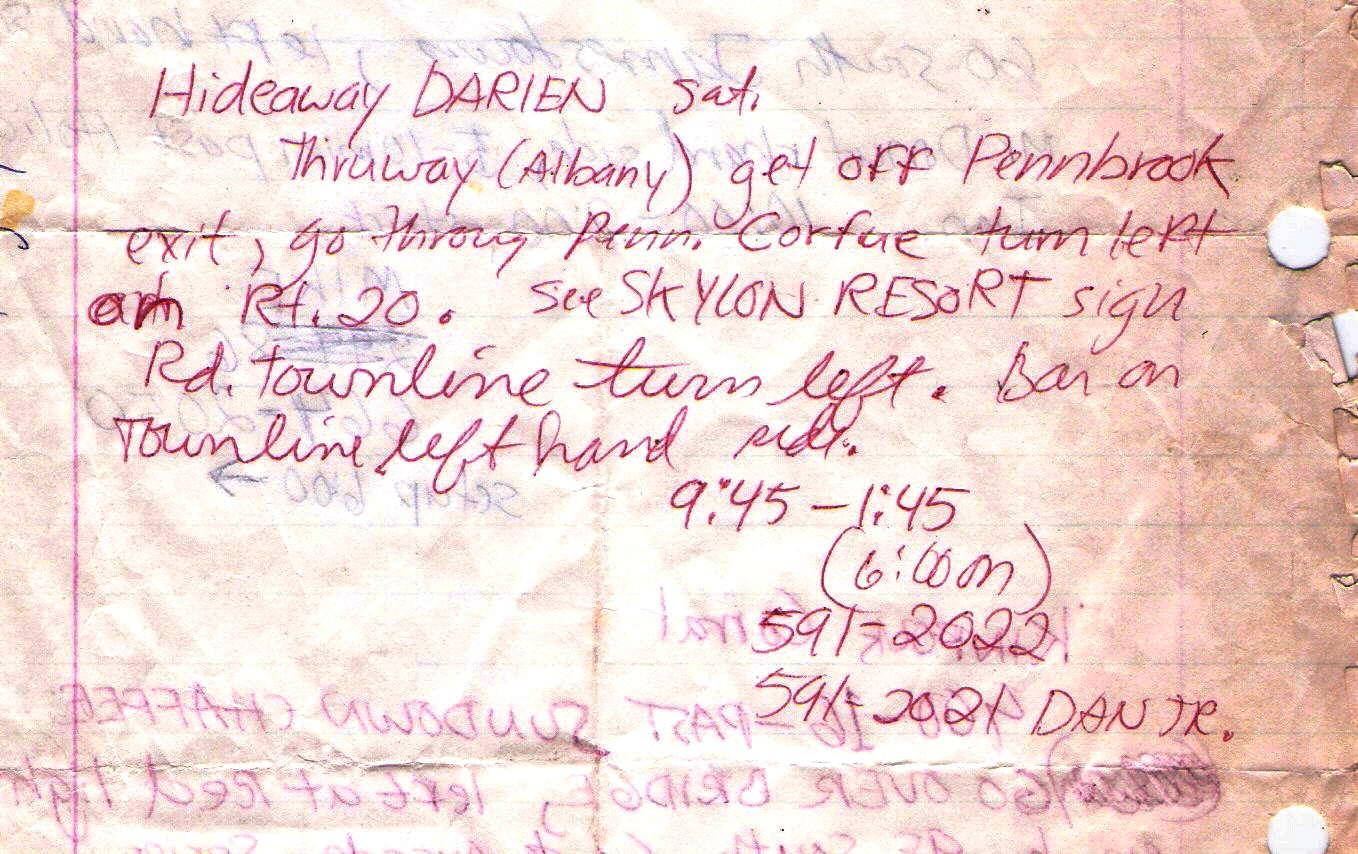 As usual, the directions we received left much to be desired.  “Head towards Albany” then “Get off at Pennbrook” is really get off at Pembroke… then wind our way through Corfu and find route 20, make a left and look for the Skylon Resort (should be Skyline resort, a camping resort).

Our booking agent Dave Buffamonti suggested we take the gig in Darien, for the exposure and the chance to build an audience in a neighboring town that loved rock music.  We saw it as another one of those stepping stone towards our goal of heading-out across the East Coast on a college tour.

The Hideaway was near a Camping, RV and Mobile Home resort and it was summer… lots of peeps traveling all over Western NY on their way to Crystal Beach, Niagara Falls or Darien Lake.  Surely they would stop in for a brewski at the local watering hole called The Hideaway… a name the locals couldn’t resist because that’s what most of these resort dwellers wanted… to hideaway from everything (especially the gubberment) and so, it was a perfect match.

They were a captive audience and we were ready to unleash upon them our own special brand of Parousia rock with songs like “Myron”, a mini rock-opera about a misfit who gets his revenge, “Lucifer’s Lament”, a song that makes us look at the devil inside all of us, and “Revelation”, a song about how each of us are defined by our outlook on life.  Yes, we rocked, we rocked well and hard this night from 9:45 pm to 1:45 am.

Dave Styn (head roadie) ran the sound board for $30.00 and Mike Carroll ran lights for $40.00. Keith Huels, ‘1st roadie extraordinaire’ earned a whopping $5.00 for his nights work. Tom (Tim) Miller, 2nd roadie extraordinaire  earned himself $10.00.  Barry was paid his $10.00 for gas to haul us around and Rick at Backstage took 15%, ($38.00). $9.00 dollars was spent on something mysterious, listed simply as “materials’… yeah right, obviously DRUGS! HOOKERS!!  (really really cheap ones for $9.00…). The truck rental cost was deferred because we were doing a show tomorrow night (Sunday) at the Melody Inn, Jamestown NY. 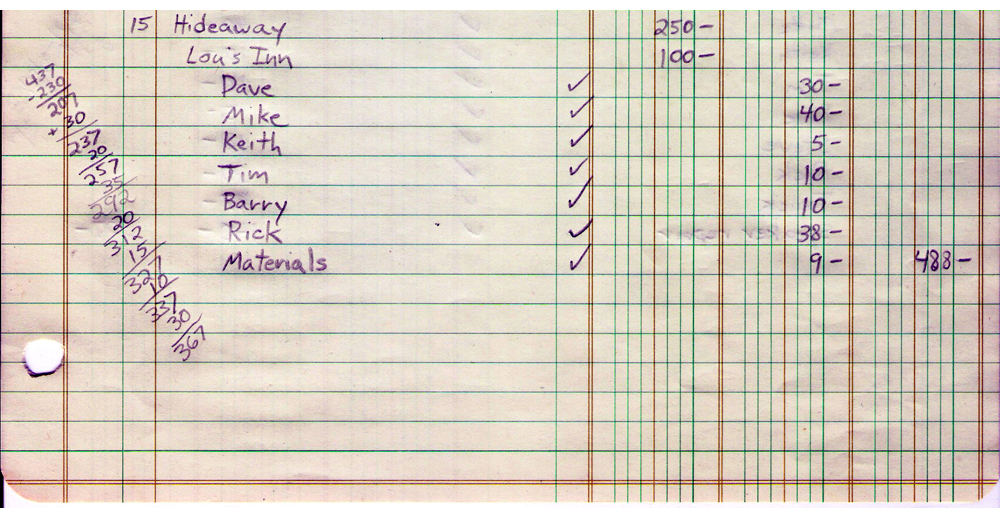 This gig was part of a very busy summer.  The month of August began with a double-booking on Saturday, August 1st.  During the afternoon we played an outdoor concert on Hertel Avenue in Buffalo called “The Hertel Happening”.  That same Saturday night, we performed at a lakeside venue called the Eagles Roost in Olcott, NY. 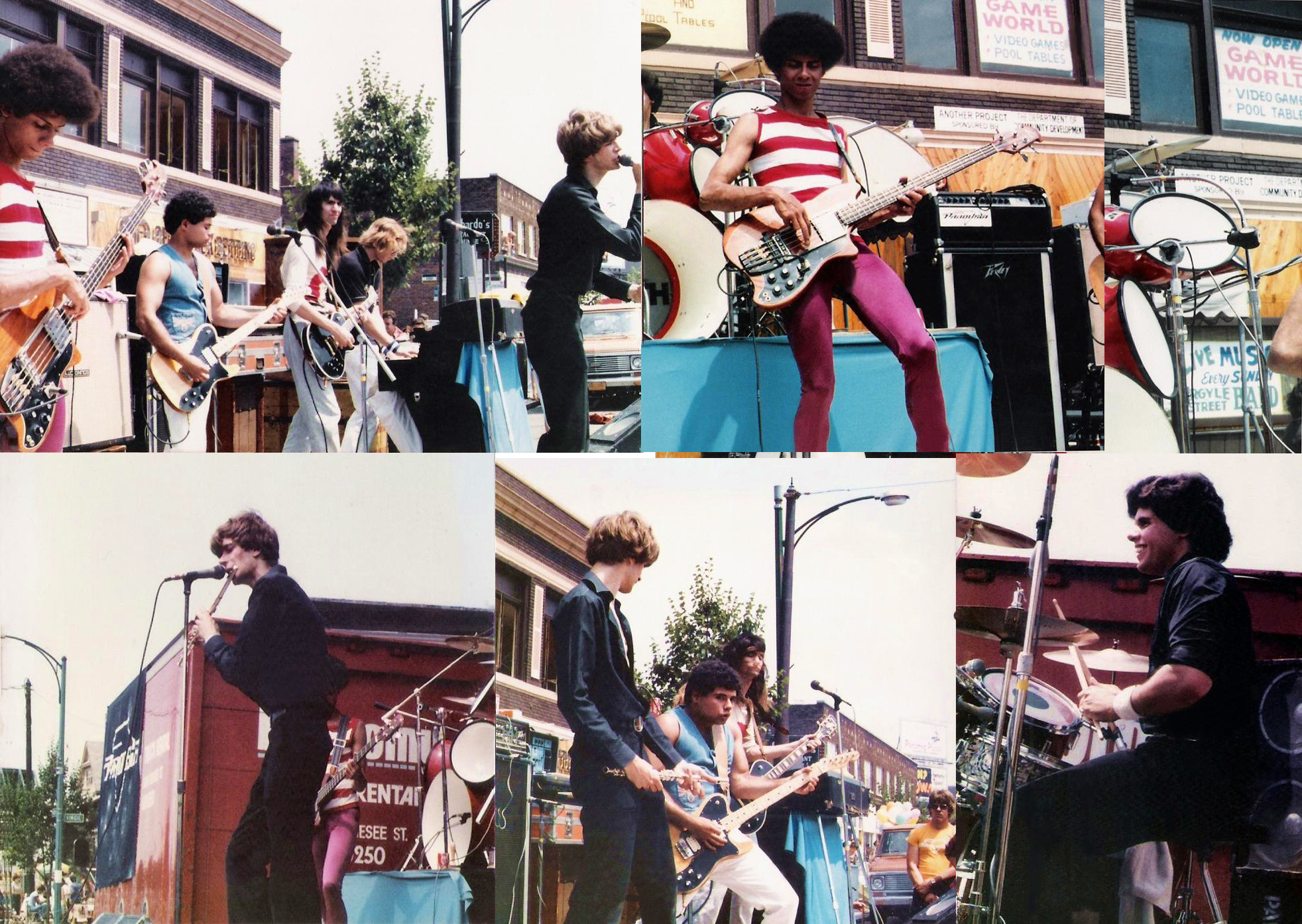 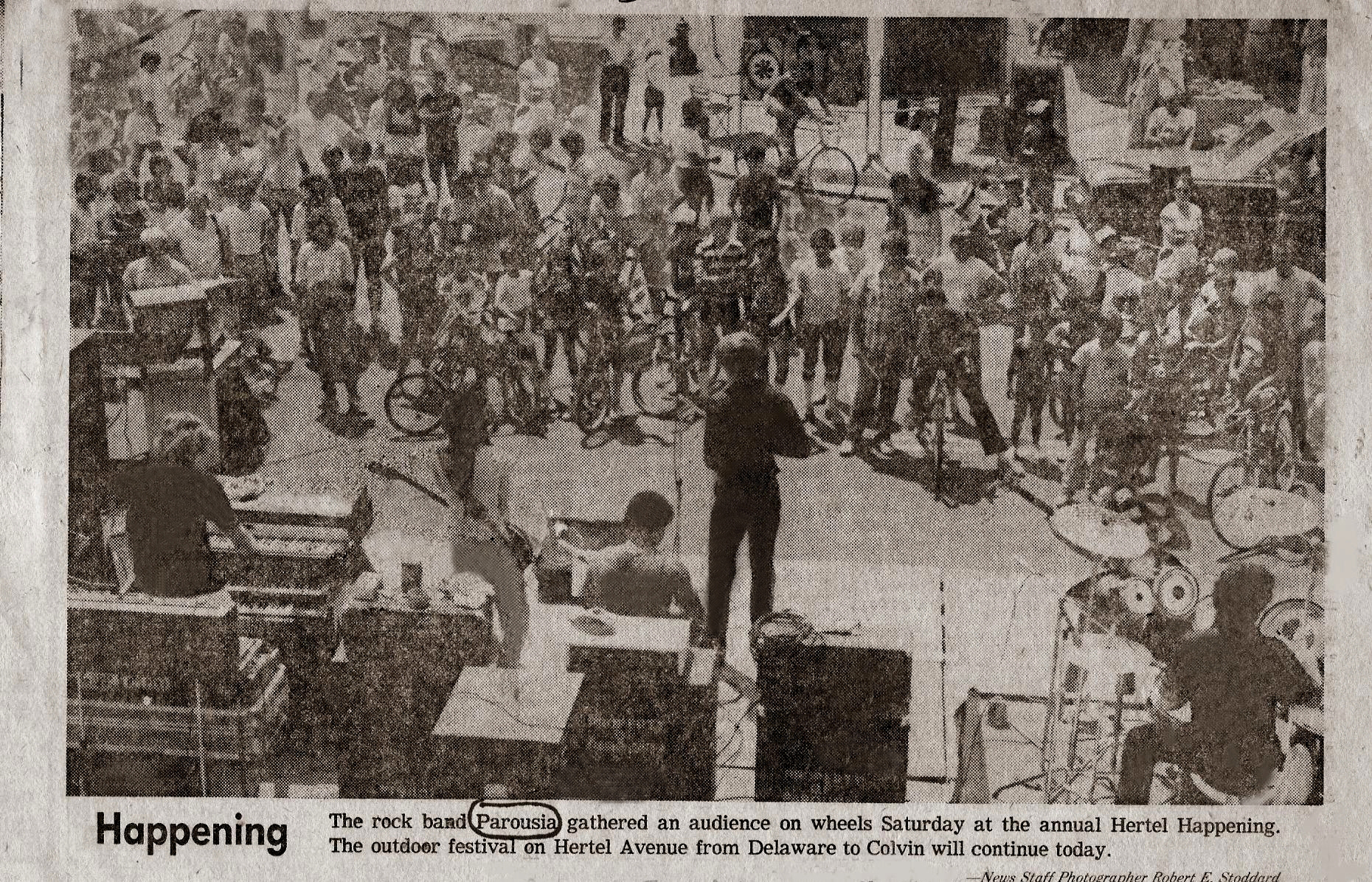 Suddenly the name Parousia began to appear in Buffalo newspapers for one reason or another… Starting on August 2nd when the Buffalo Evening News published a picture of Parousia performing at the Hertel Happening and then again on August 20th when the Riverside Review published a complaint against Parousia blasting our behavior at the Riverside Park concert. 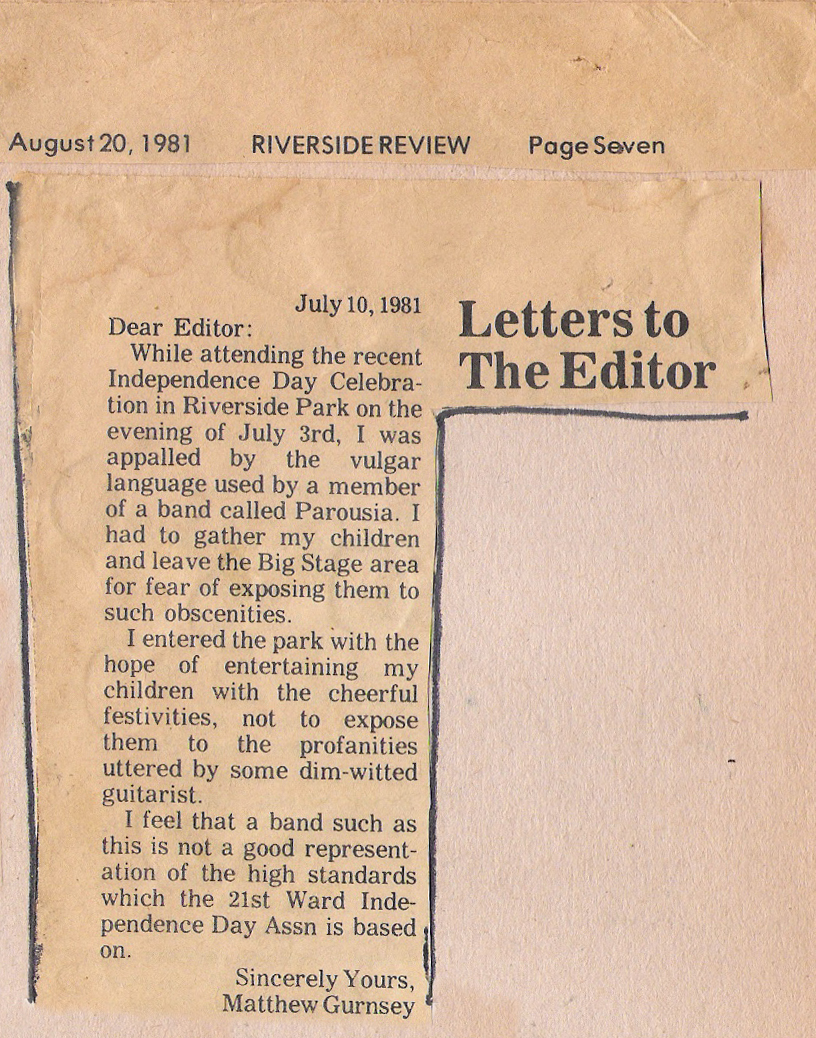 Apparently we infuriated one person…  The outraged author, Matthew Gurnsey said he was “appalled by the vulgar language used by a member of a band called Parousia”.  (That ‘member’ happened to be our guitarist and my brother, Barry Cannizzaro).  Gurnsey claimed he was so offended, that he had to “gather his children and leave the big stage area for fear of exposing them to such obscenities” and “the profanities uttered by some dim-witted guitarist.”  Oh, dear, clutch your pearls and avert your eyes!  I mean, who was this guy… Ned Flanders??  We never held it against Barry because, well you know he’s dim-witted and besides, … any press is good press. 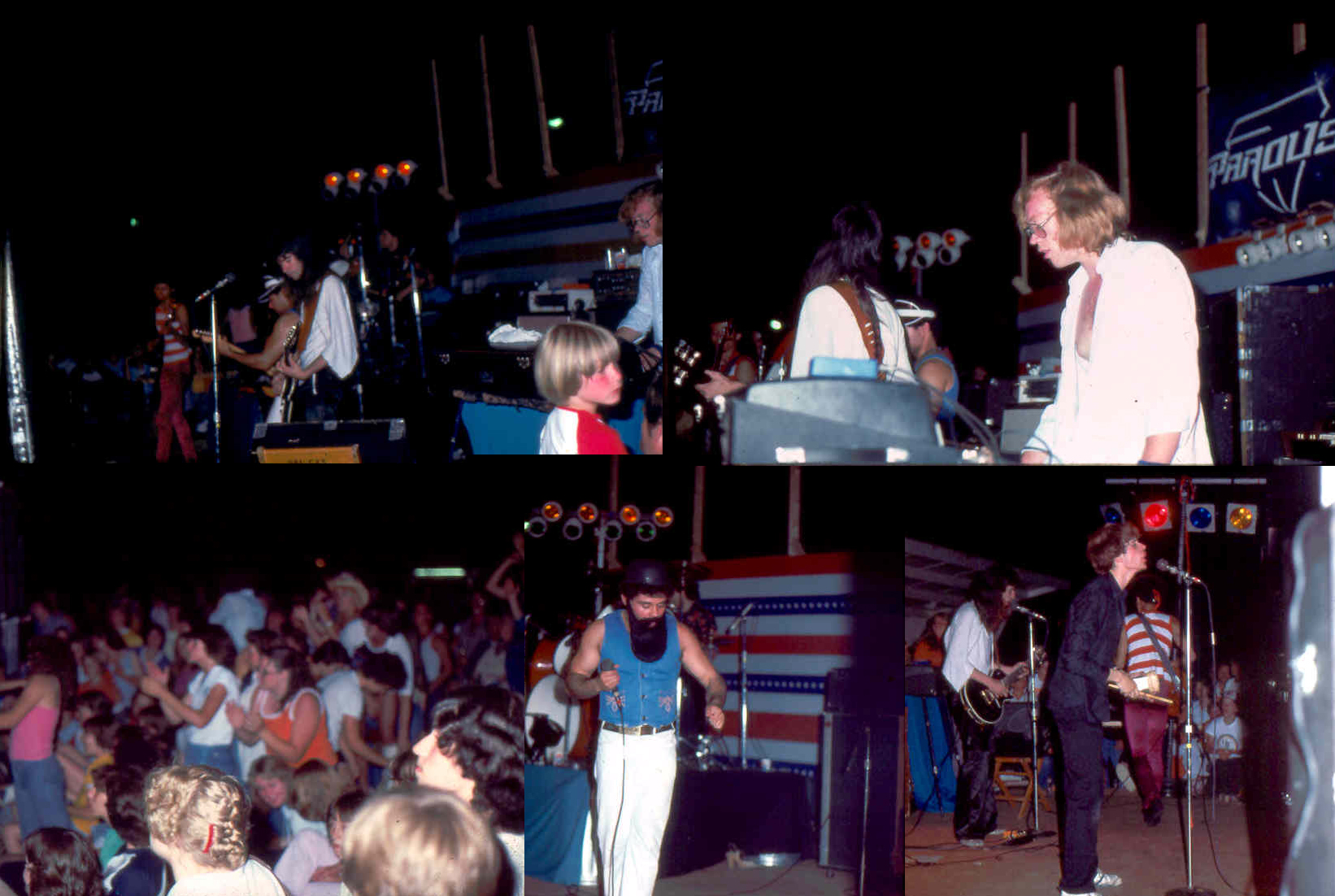 After our show at the Hideaway in Darien Center NY, we wrapped up the month with a string of gigs.  We played the Melody Inn in Jamestown, NY on Sunday, August 16th, then the Holland Willows in Holland NY, on Friday August 21st.  Then back to Buffalo on Saturday August 22nd at ‘New York New York’ on Harlem Rd.  We closed the month on Friday, August 28th playing an all-age show at the Teenage Hot Spot in Depew, NY on Broadway and Transit.