The roots of Parousia go way back to the early 70’s, you know, when dinosaurs roamed the earth and your phone was connected to the wall with a wire!  Yeah, that long ago…

Check out these photos of the boys when they were, well, just boys.  Literally.  They look so young and innocent, who would have known what they would start? 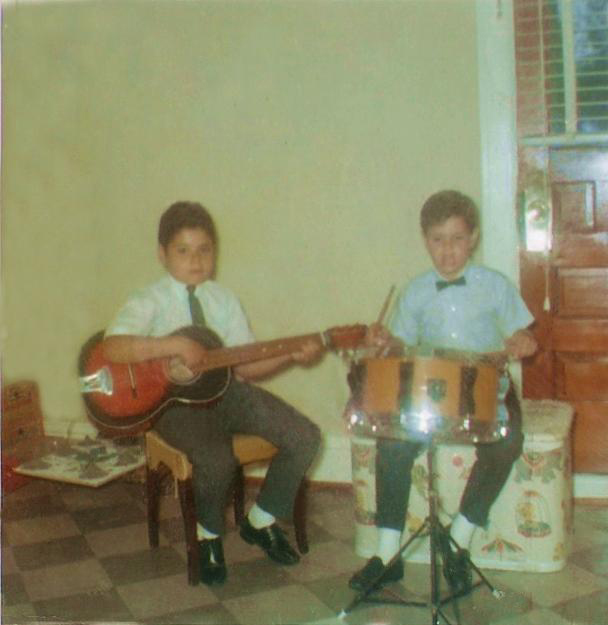 Recorded using a portable cassette player, “Crystal City” (1975) is the first original song recorded by Parousia.  Conjured in the attic at 104 Baxter Street in Riverside.

Gerry tells the story of the beginnings of Parousia…

Parousia - In The Beginning...
We would jam in Gerry’s Garage…

My brother Barry had been playing the guitar for years, long before I started formal drum lessons at the age of eight.  When it came time for high-school, I ran into a bunch of very talented musicians.  Some of whom, I never knew lived in my own town of Riverside and Patt Connolly was one of them.  The first time I ran into Patt was at St. Joe’s high-school freshman orientation in the spring of 1974.  Because our names, (Cannizzaro and Connolly) began with the letter ‘C’ we sat in the same homeroom class and because he lived in Riverside like me, we took the same city bus to and from school. 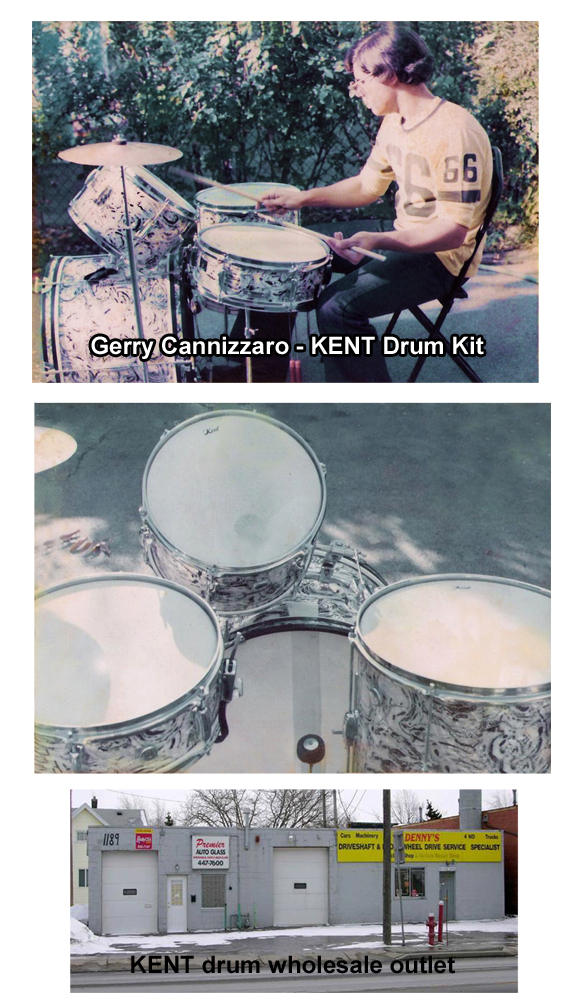 On the bus, I noticed that he carried a flute case.  During summer of ’74 we ran into each other again at Riverside Park and we talked about music and writing songs.  We started sharing albums like “Tommy”  by the Who, “Head Hunters” by Herbie Hancock, “Benefit” by Jethro Tull and Weather Report by Weather Report.

In the spring of 1975, Barry, Patt and I started to jam in my parent’s garage at 104 Baxter.  We were just a trio, Guitar, flute and drums, but I didn’t have a hi-hat yet just a basic 4-piece kit with one splash cymbal and no ride.  We didn’t have a vocalist per se’ at this stage of development. Not that it mattered; we were content just to jam instrumentally and create music. (Besides, none of us owned a professional vocal microphone). After a few months of playing, the three of us agreed that we should start a full band. We needed a main vocalist, a keyboardist a bassist and much more equipment. 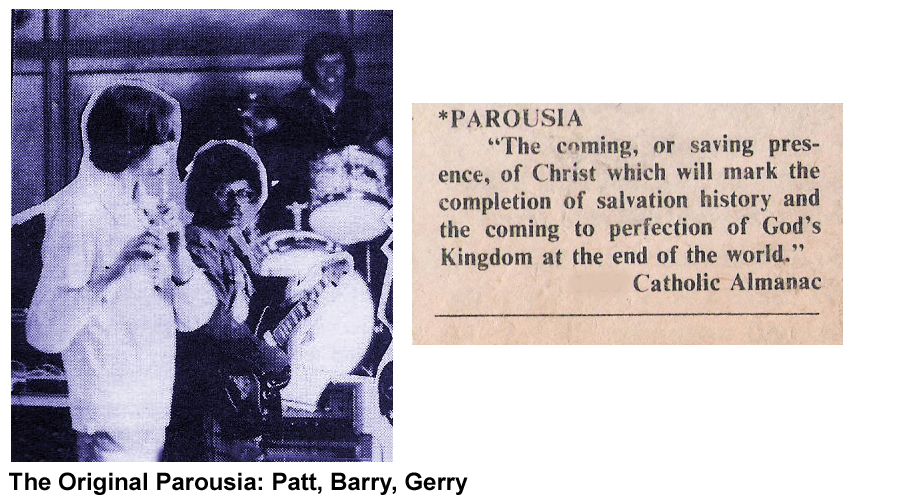 In the summer of 1975 the band expanded beyond the three founding members to include Steve Soos (Organ & Piano) and Rick Kollmar (Organ & bass pedals).  For the most part, we were just a group of neighborhood kids and a close circle of friends.  All of us knew each other either from St. Joe’s high-school or Church.  Patt worked over at ST. John’s in Black Rock while Rick, Barry, Steve and I worked at All Saints in Riverside.

On June 27th 1975 Rick Kollmar and Steve Soos officially joined Parousia and both played keyboards.  Problem was, neither one of them owned a portable keyboard so Barry, Patt and I would continue to rehearse by ourselves in the garage on Baxter Street or in the attic, where we wrote our first original song, “Crystal City”.  Meanwhile, Steve and Rick would rehearse the same set of songs at home. This arrangement would have to do until we could figure out a way to put all of us in the same room at the same time.

On June 30th, 1975 we had our first band meeting at Alan Swan’s yard (in a very large tent). It was then that I suggested the band name PAROUSIA.  I’d been kicking that name around ever since I came across it in a bible passage from the book of Revelation.  It wasn’t that I, or any of us in the band were especially religious… We just really liked the dark ‘end-of-the-world’ images from Scripture.  Anyway the name “Parousia” was agreed on for better or worse and we began charting the early course for the band.

It was decided that Alan Swan would be our first booking-agent and Gary Cherneski would help out on promotion and develop the first band logo (which at the time was the Parousia name written in cursive with a diamond dot for the “i”). 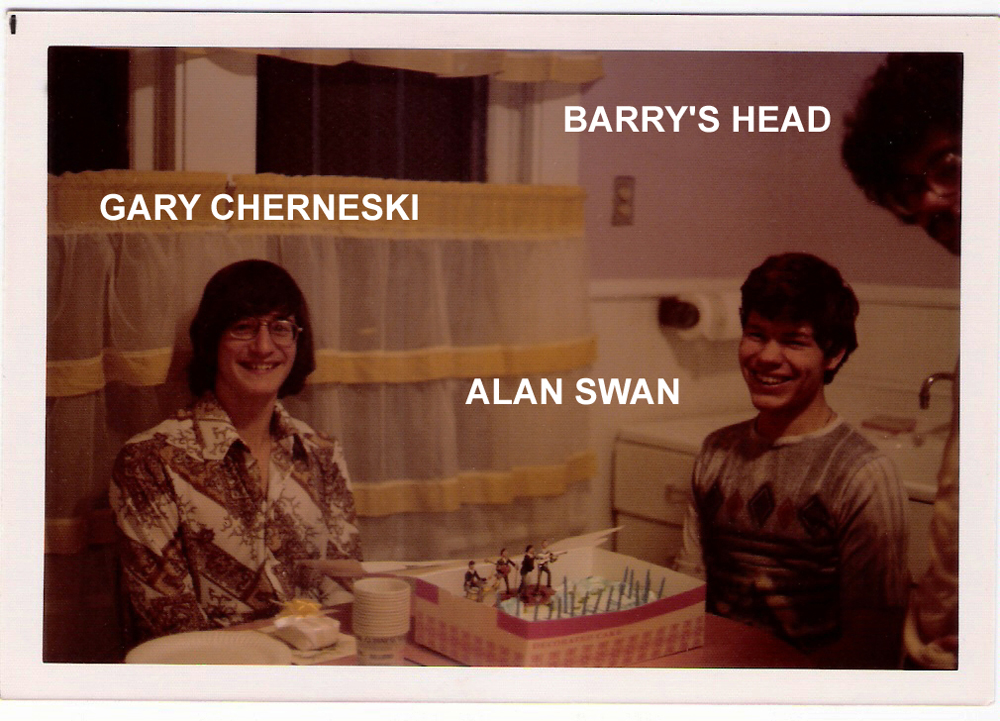 In the fall of 1975, Parousia began rehearsing on Sunday’s at All Saints Elementary School on Esser Ave in Riverside. This was a leap forward for two reasons; first, we finally we had a consistent place to rehearse that was heated in the winter.   Secondly, the school had a Wurlitzer organ and an upright piano which allowed Steve and Rick the opportunity to rehearse with the band.  The  rehearsal space came at the right time because our first gig was set for October 26th, 1975 at the C.Y.O. Halloween party.  Of course we all were very nervous to play in front of an audience of our peers outside of the garage environment, but very excited too. Our first show featured Gerry (drums & vocals), Barry (guitar & vocals), Patt (flute & vocals) Steve (piano) and Rick. who played bass on the organ using the keys and foot pedals (much like the Doors, Ray Manzarek).  Our first songs included “I’m Free” by the Who, “Smoke on the Water”, by Deep Purple, “Iron Man” by Black Sabbath and “Aqualung” by Jethro Tull.

Once we decided on a repertoire of contemporary rock songs, Rick Kollmar quit the band because his vision of a Parousia’s was something more suited for lawn fete’s and polka parties.  But the rest of us had something bigger in mind, much much bigger.

We realized that we had to find a full-time bass guitarist to get the rock sound we were looking for. Organ pedals were just not cutting it.  The next day, we approached Mike Newell (a fellow St. Joe’s student) with an offer to join Parousia.  He accepted and our next gig at the C.Y.O. Christmas Dance on December 22nd, 1975 sounded much closer to what we had in mind.  The rock band Parousia finally had ‘lift-off’ and started a ride that would last 17 years… 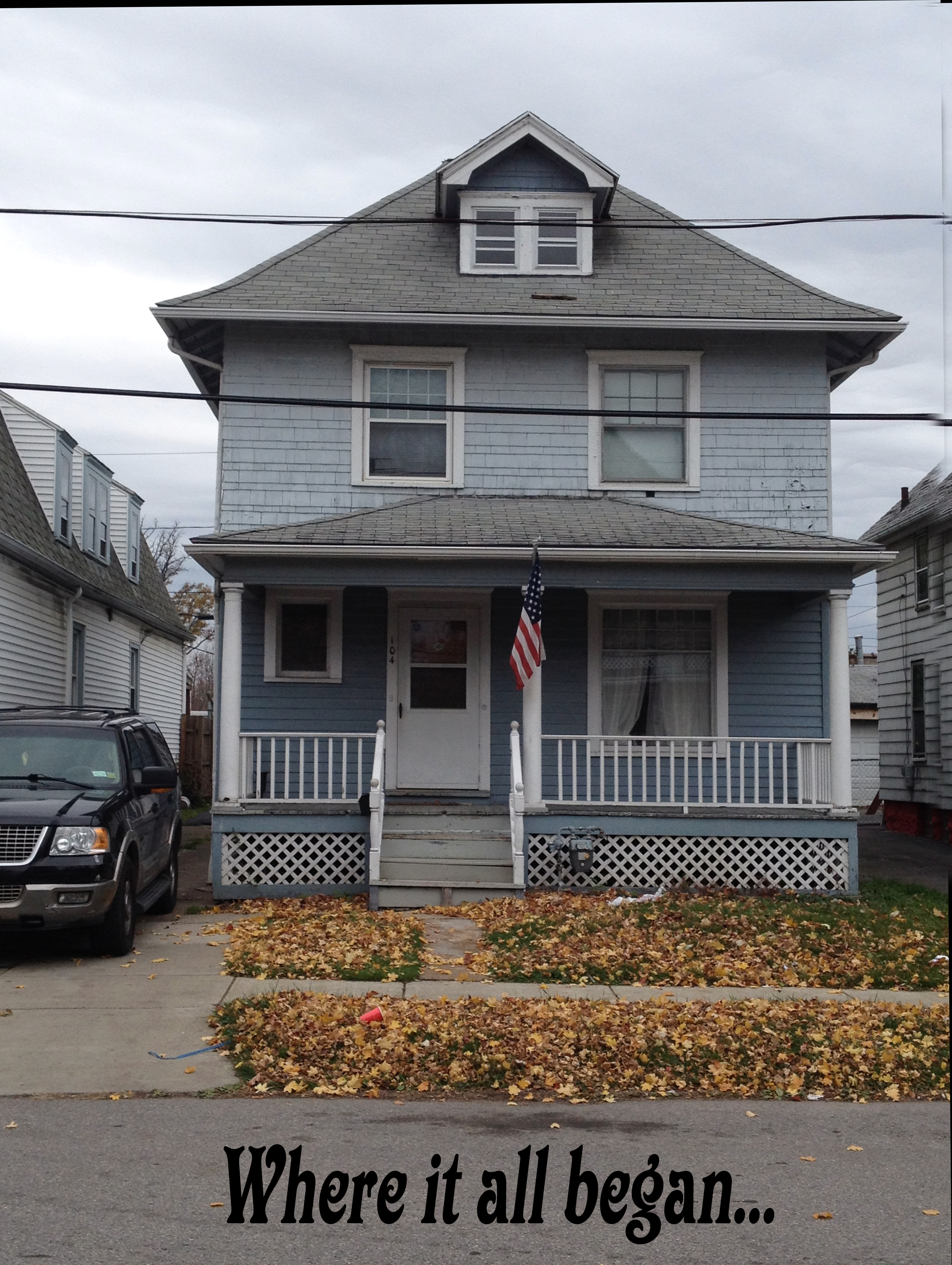 2 comments for “The Genesis of Parousia – In The Beginning…”