Finally the moment had arrived… Our first L.A. show!  After more than a year of getting settled-in and making the transition from Buffalonian to Los Angelino, we were ready to appear in front of an audience again and give the people a show to remember.

We spent a long time writing new material, re-forming the band and rehearsing the songs.  Robert Lowden replaced Garth Huels on lead guitar.  That was not an easy transition to make… For nearly ten-years Garth had been a significant part of PAROUSIA and for him not to join us in L.A. was tough to swallow.  It forced us to re-assess and step-it-up a notch to make-up the difference.

It took sometime to reconfigure and get the show to sound presentable, but Robert was ready for the challenge.  He had a lot of raw power, an artistic style and a ton of talent to unleash.

Besides working on the music, we worked on an interesting and engaging stage performance that included portable artistic scenery, weird props, trendy wardrobe and plenty of energy. 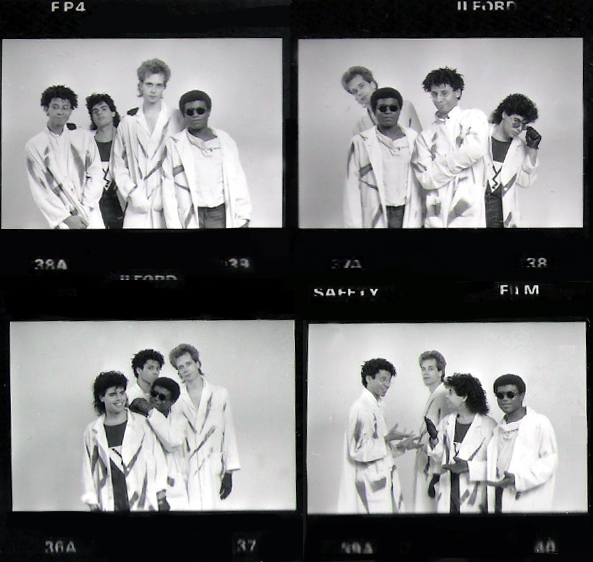 Just prior to our L.A. debut, we had managed to work up some attention in the local press.  It started on March 4th, with an article published in the “Daily Bruin”, the main reading rag for the students at U.C.L.A. College.  It was a tongue-in-cheek story of the bands relocation three-thousand miles West to Hollywood, CA from Buffalo, NY and talked about our E.P. “Turnaround” for sale at local boutique record shops on hip and trendy Melrose Avenue in West Hollywood and available at the iconic record store, Rhino Records.  Even the writer bought one! 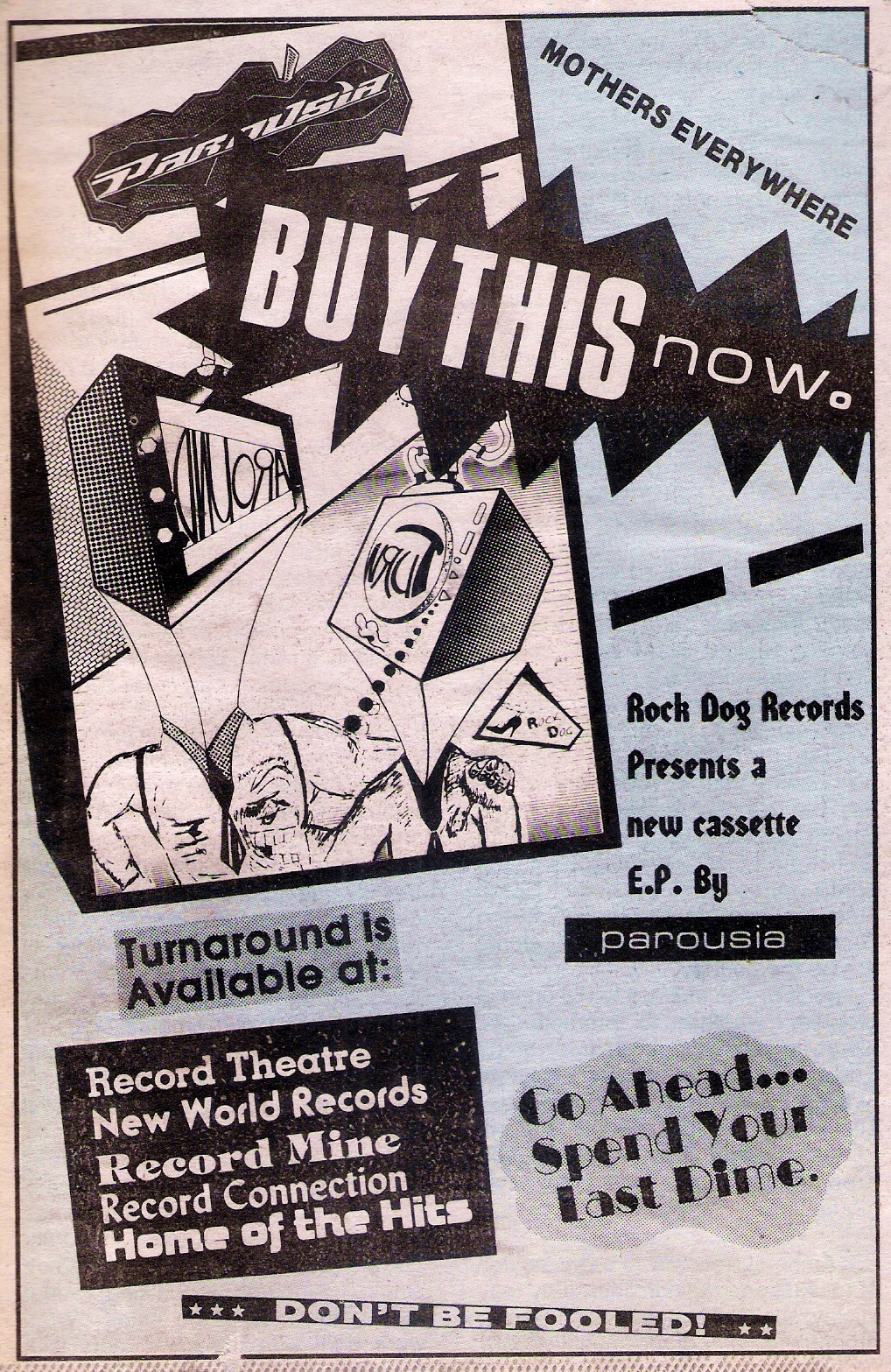 Next we received a generous review in a local popular free news magazine called “the Reader” with an article written by Cheli Bremmer.  It was a bit of a biography… She was very kind and described PAROUSIA as “Fresh and Passionate, with a hard hitting rock sound that is still melodious.” Cheli talked about the bands roots in Buffalo and our multi-media shows at the Chamber just prior to moving to L.A. (and of course our Turnaround E.P. on sale for only three bucks!). 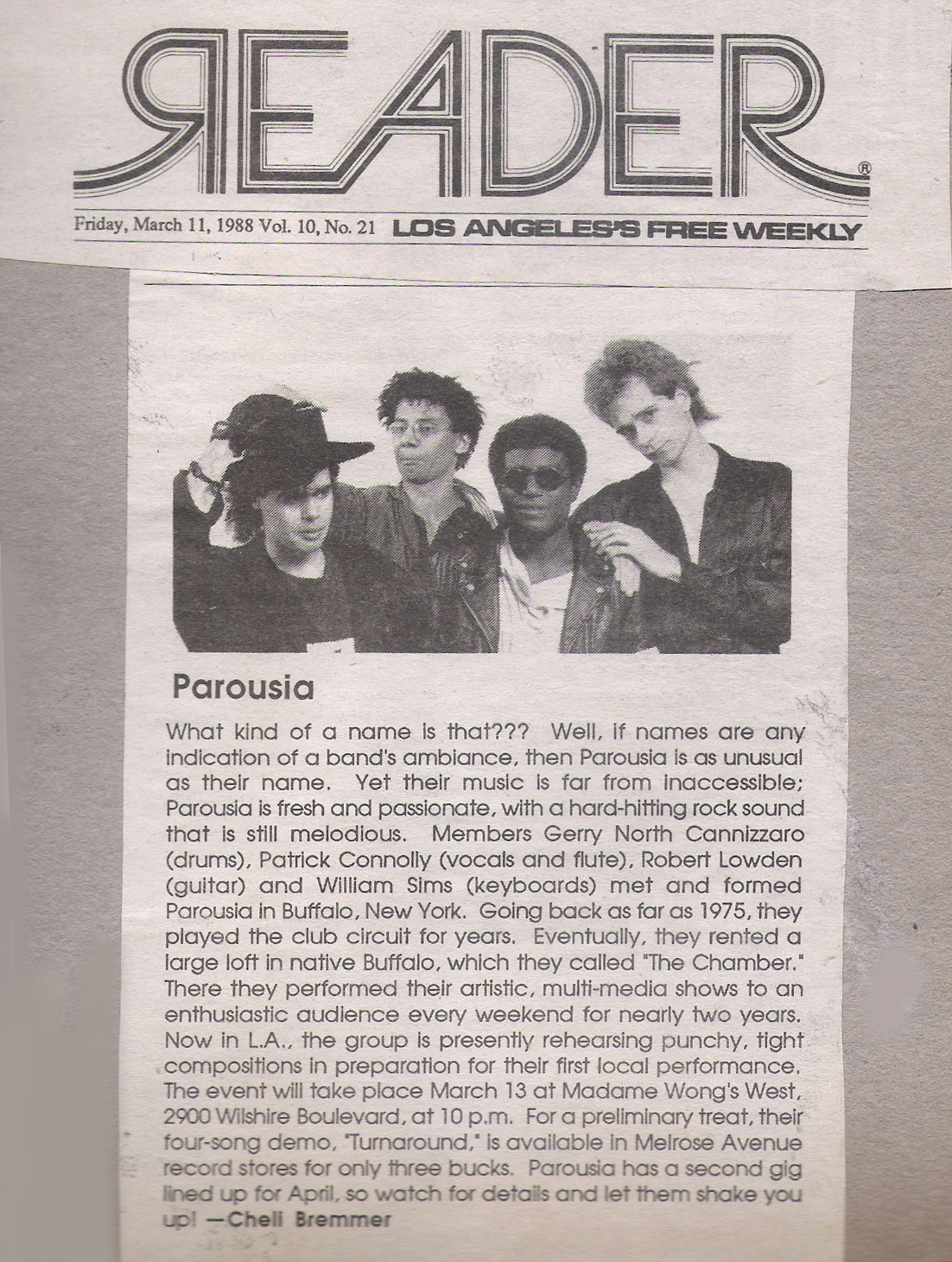 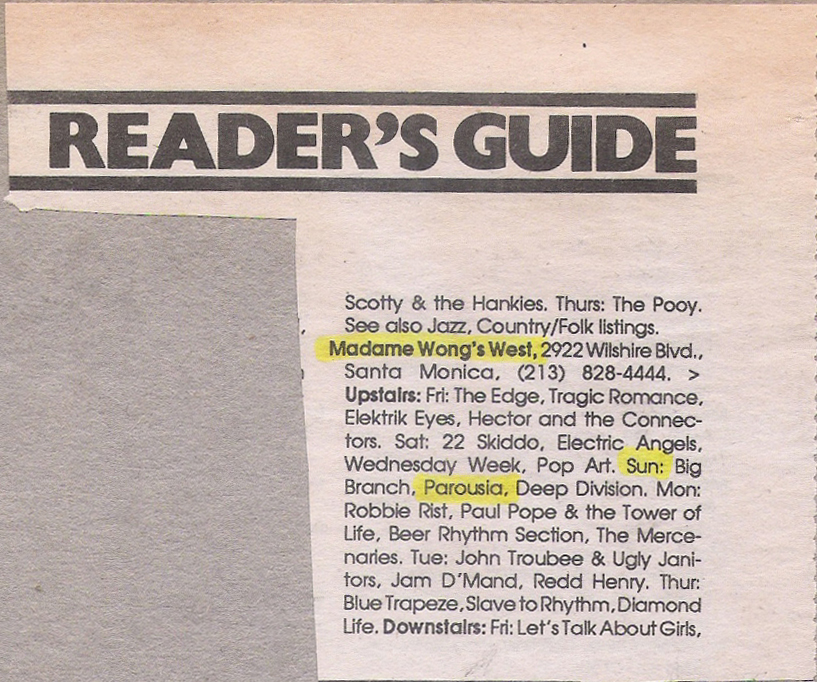 I have to tell you it was quite a thrill to see for the first time Parousia’s name appearing in well known Hollywood industry entertainment newspapers like BAM Magazine, the L.A. Weekly and Rock City News. 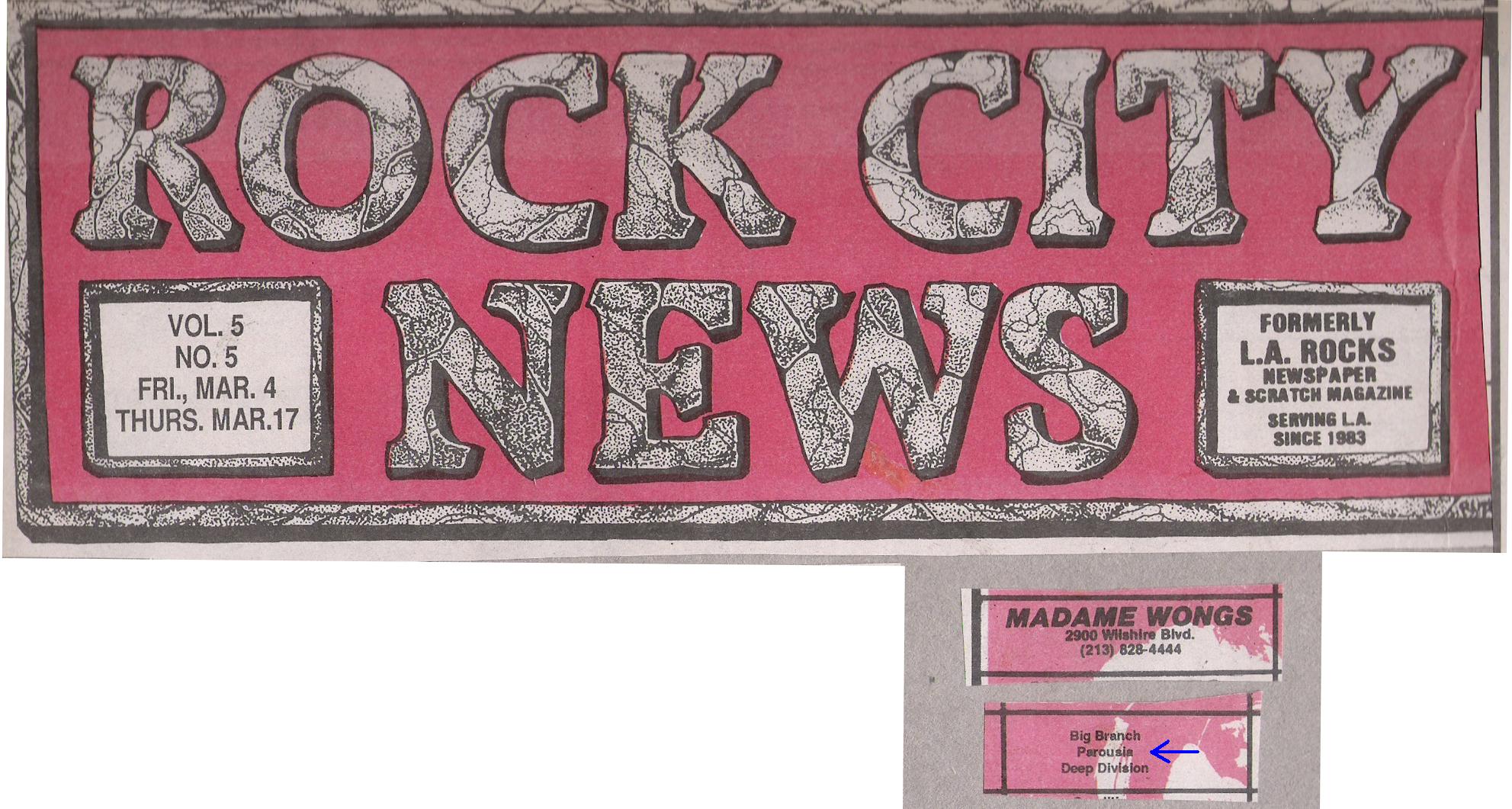 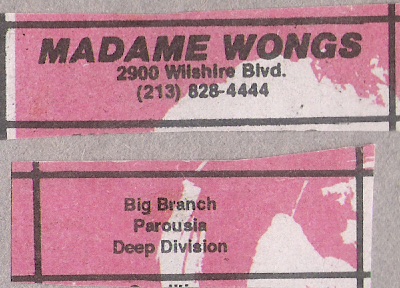 The L.A. weekly listed our show as “the debut of New Yorkers Parousia whose sound has been likened to “Missing Persons, Marillion, Jethro Tull and new YES”. 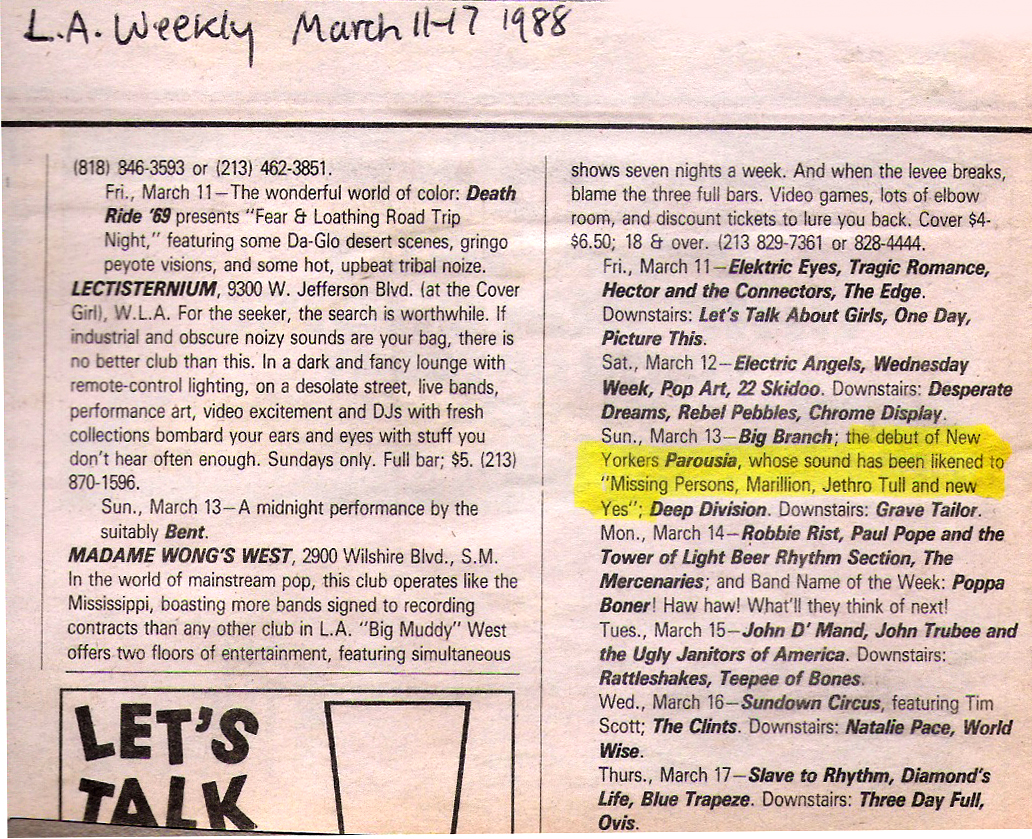 We had a lot of nervous energy at this show and I remember all of us huddling back stage before we went on. Patt read aloud his list of focus points for our first show. It was well done and I remember feeling really energized by it.  This is how they went:

The last ones, #9 and #10, scared the shit of out me… but was good motivation at the time. 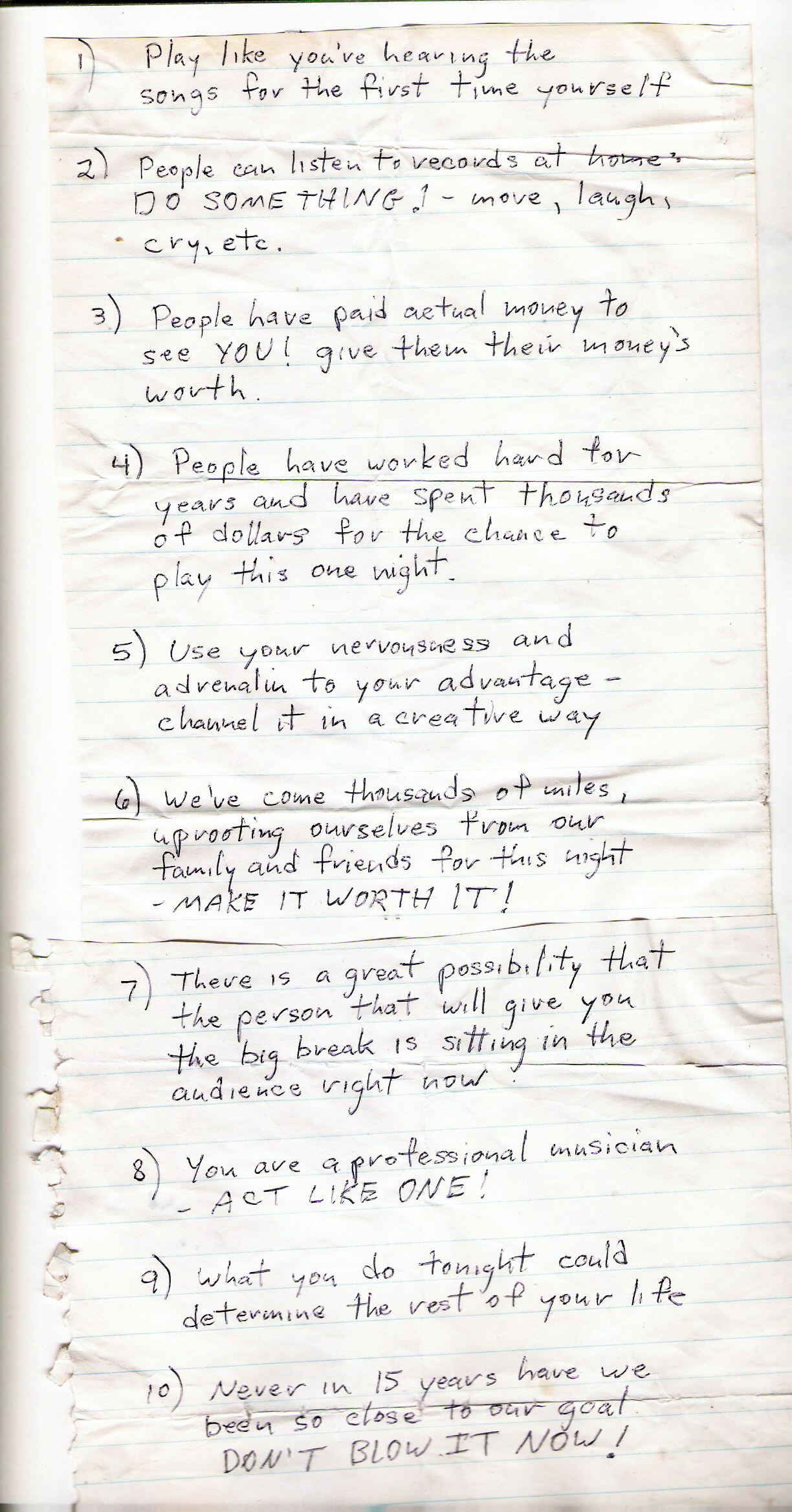 After the list was read, we ended with a united shout of EXCELSIOR, and then exploded on the stage with a years worth of pent-up enthusiasm, the likes of which I’m sure seemed very entertaining to the audience.

Our debut that night was on the upstairs stage; known as the “Big Stage” and it was an honor to perform there on our opening night.  Sharing the upstairs stage with us was the headliner “Big Branch” and a third act, “Deep Division”.

Our music, being conceived in Buffalo and not the West Coast, was different from what most other bands were playing in the L.A. scene at the time.  We were distinct in that we had complex, melodic songs seasoned with a killer flautist and that little surprise knocked people on their ass a bit. The important thing is, we were tight, loud (as usual) and we stood-out from the pack. 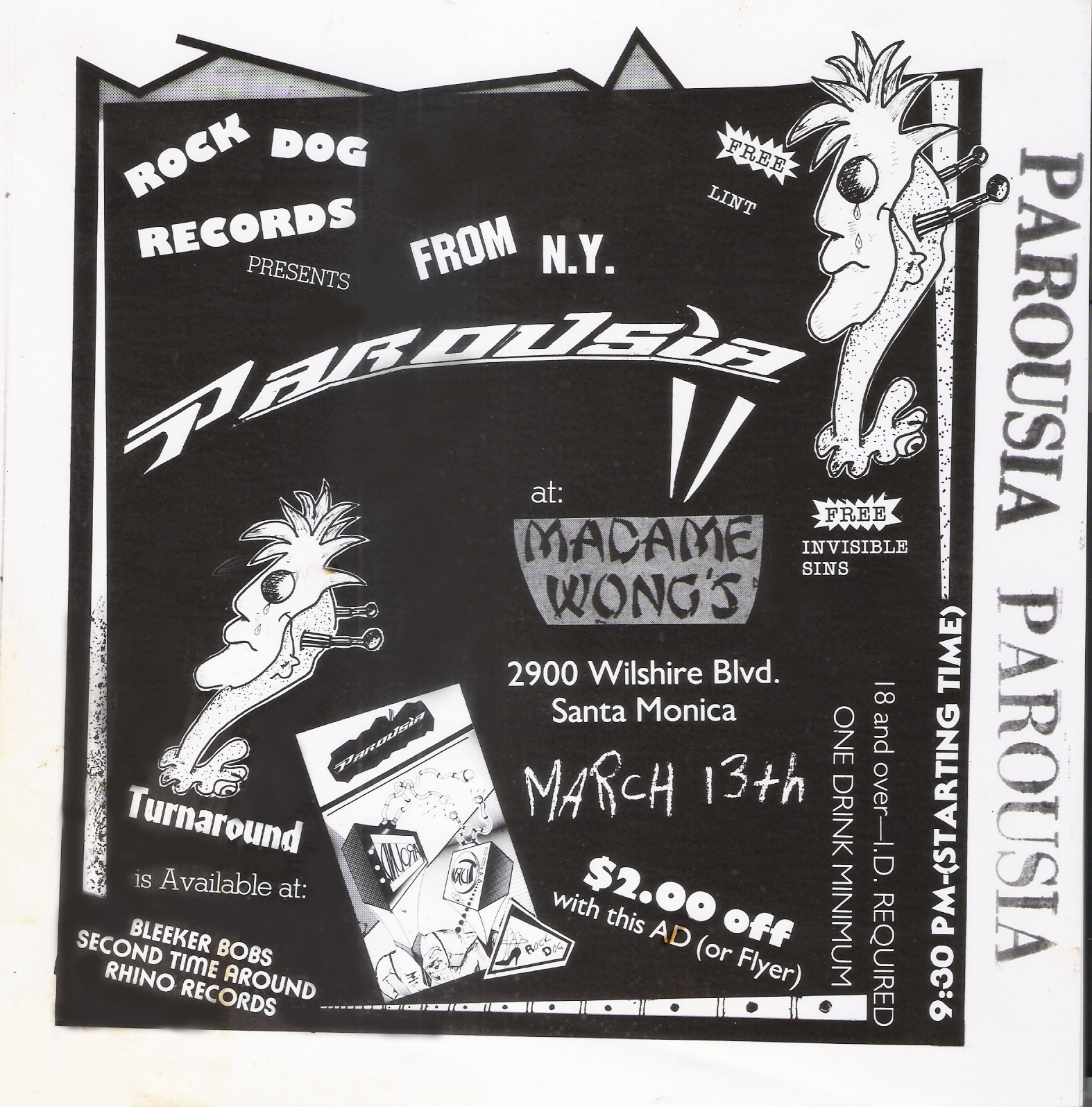 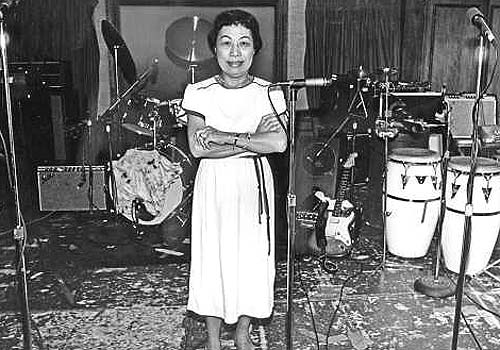 Esther Wong, the unlikely “godmother of punk, showcased such groups as Oingo Boingo at her Madame Wong’s clubs in Chinatown and Santa Monica in the late 1970s and ’80s.

At first slow to accept punk rock, new wave and other 1970s music, the colorful and sometimes controversial Wong came to be one its most ardent patrons in Los Angeles.

Esther and George Wong had been looking for something to attract people to their restaurant and bar and the new wave scene was looking to conceive itself in some new incongruous way.  Esther Wong purchased a huge place in Santa Monica calling it Madame Wong’s West. It looked as if it had been designed by the dad from the BRADY BUNCH.

There was a downstairs stage and an upstairs stage. Bands were required to play the downstairs stage for free and if enough people came to see you, you could play upstairs for a cut of the door. Madame Wong’s soon became simply THE place to play. 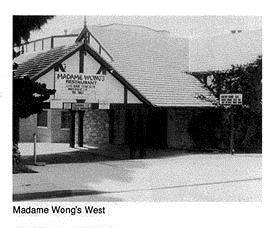 Madame Wong’s West in Santa Monica operated from 1978 to 1991. Esther proved to be a staunch supporter of new and local groups. Besides Oingo Boingo, her stages presented the Police, X, the Motels, Oasis, 20/20, the Knack, the Know, the Textones, the Go-Go’s, the Plimsouls, the Kats, the Nu Kats, the Bus Boys, Plane English, the Naughty Sweeties and others.

Wong chose the groups by listening to audition tapes – although she had to give up playing them in her car.  “I got a very bad temper,” she told The Times in 1980. “When there’s a bad tape, I throw it outside the window. One day I almost hit the Highway Patrol car that was right next to me.”

A no-nonsense businesswoman, Wong was disparaged by some bands for her temper. She once stopped a show until two members of the Ramones cleaned up graffiti they had written on the bathroom walls.  Esther Wong died at the age of 88.