The Shutters & Boards gig on June 2nd was Parousia’s first local show without vocals from the illustrious Ms. Kim Watts, who had just quit the band as a protest against our intention to accept good-paying gigs no matter where they are located… she had a big issue with Parousia performing for “hicks”, deep in the isolated South towns of Western NY and miles away from cosmopolitan audiences found in the eccentric parts of Buffalo.

There was a lot of pressure on us for this gig.  On May 29 & 30, we had just performed at one of one of the worst venues in our life, Lou’s Inn, Westfield, NY.  You can read why it was so horrific here. 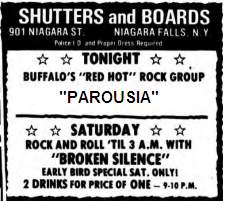 Tonight, we had to make a psychological come-back for our own egos.  Kim said that Lou’s Inn would be a disaster, and it was… was she some sort of psychic, prophet, seer, oracle, witch?  …Who can say, all we knew is that she was gone for good and the rest of us on-stage together as a six-member band.  We had to play well tonight if we were going to prove to ourselves that we (just the guys) could kick-it harder than when Kim was on the stage. 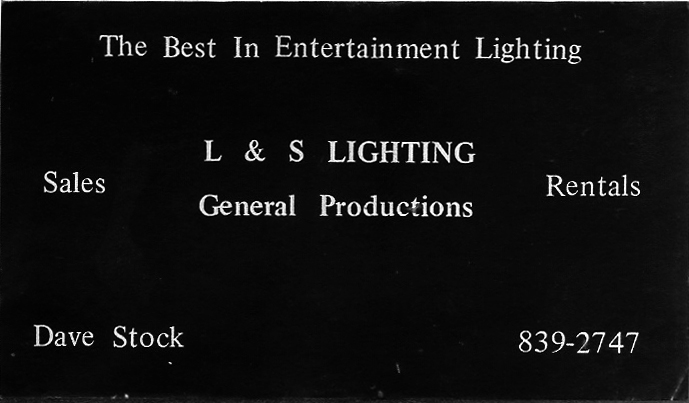 Another first for this evening was our new lighting technician, Dave Stock.  He was a solid professional and was in great demand amongst our peers.  Our former light-man Mike Carroll had highly recommended him.  His arsenal of lights was quite awesome and he knew how to use them.

Providing some motivation, was a promising review of PAROUSIA published in the June edition of Buffalo Backstage Magazine which was widely distributed in WNY.  That should have given us a boost in confidence except the article mentioned Kim Watts as being part of the group.  It reads as follows:

“Parousia means a world after the end of life as we know it now. Even if you didn’t know what it meant, the word Parousia conjures up a meaning of something different and this is very appropriate because Parousia is not your normal run-of-the-mill rock band.

Until recently, the influences of Parousia had an adverse effect on their popularity.  All too often people wanted to hear the same copy material from the recording superstars. Possibly, the audience did not understand talent and they wanted groups to play the same old stuff so they could compare them to each other and try to figure out who was better.

Now show and original material is demanded by WNY audiences, people want to see what bands can offer as themselves and bands playing the SOS are losing popularity.  The turn of events has put Parousia in the driver’s seat. They are one step ahead of the crowd-now people want to hear what they have been doing for years.

According to the band, they’re still having a problem breaking into the more established clubs. However, that should soon change because the crowds they are drawing, at the smaller and intermediate sized clubs, will make it necessary for the big clubs to put them in.

They’re looking forward to working the larger clubs as they will have the space to properly perform their show, giving the people more of what they want.  The band is more of a concert style band and they want to perform it in a concert style setting to enhance the show.

And what a show they are.  A seven member band, constant action, costume changes, props, effects and change of mood throughout.  The high point of the night is their show set.  If you have not seen it you’re missing some of the best theatrical rock in WNY. Their original material is diverse and can best be categorized as a mix of Supertramp, Jethro Tull and The Beatles – with an added touch of new wave.

Their “Miss Ogyny” is on the Buffalo Rock’s Vol.1 Album, they plan on releasing “Revelation” and one of their other many originals as a single. Also, the song “Myron”, has to seen to be believed.

Even though the group only ranges in age from 20-23, they had their beginnings way back in July of ’75 when Gerry Cannizzaro (drums), his brother Barry Cannizzaro (guitar, vocals) and Pat Connelly (lead vocals, flute) got together for a jam. After a number of personnel changes, in the summer of ’78 they were joined by Bob Lowden (bass), Garth Huels (lead guitar, vocals) and Kim Watts (lead vocals, bells, harmonica & keyboards). Their present incarnation was completed with keyboardist extranoire – Eric Scheda, in December ’79. They might be young in age but well seasoned in experience and professionalism.

The group is unique in sight as they are in sound (from Kim’s mohawk hairdo to Bob’s gyrations). Now that WNY wants show and origionality they are sure to up on the top and before long could be the next local group to make it on the national scene.”

Well, I don’t know if it was the article being published or being on stage together with that new incredible light show, but we played really well this evening.  We kicked it out hard with songs like “Hocus Pocus” by Focus, “Locomotive Breath” by Jethro Tull and “Hold your Head Up” by Argent.  At the end of the night we were paid $225.00 and walked away feeling pretty good about our future as a rock band.