Our righteous return to the town of Newfane and the little rock club on the harbor known as The Eagles Roost. It felt good to get away from the city and feel the cool breeze coming off the lake on this hotter than normal Saturday night in June. 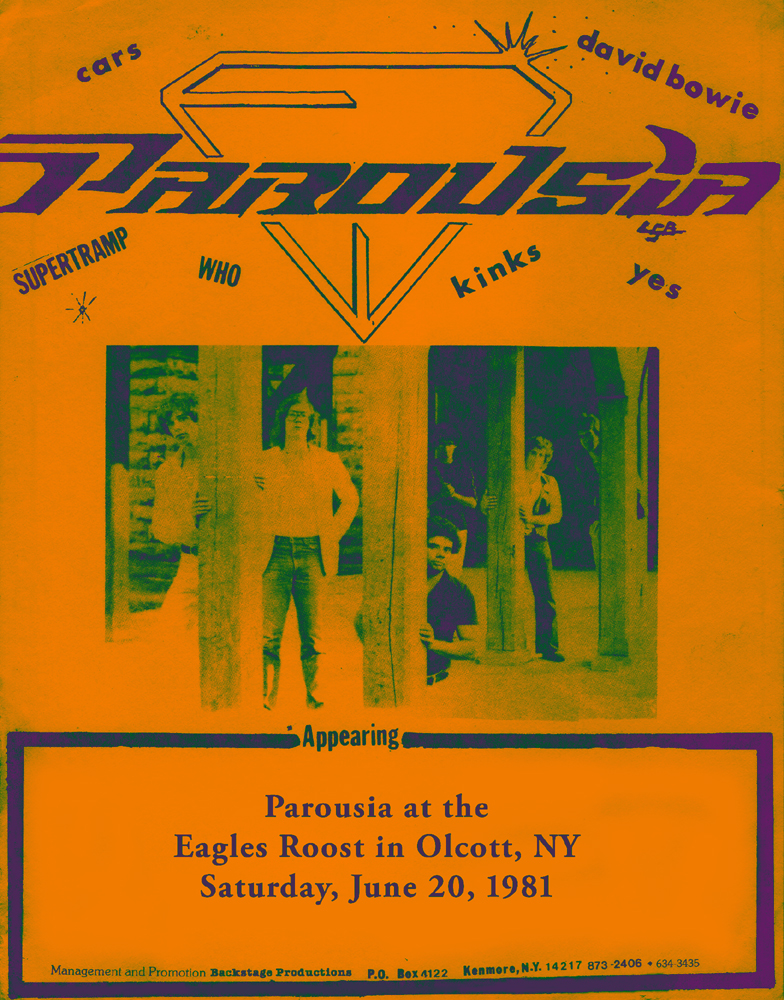 A couple of weeks earlier, Patt and I were featured on a radio interview on WGRQ FM (97 Rock), sort of a “Q and A” with Parousia where we heavily advertised tonight’s show hoping to pull in a few curious live music fans.

We were not disappointed… it was a good turnout and people were drinking like fish! But the night was not absent from anguish or pain… we felt the sting of small town justice from small-minded politicians who like to change laws just to fuck with freaky rock musicians (like us) invading their sleepy little hamlet. 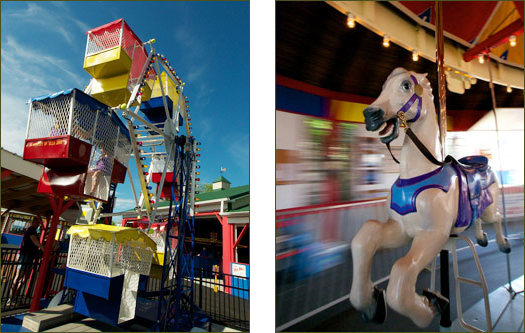 Family fun at Olcott Harbor….except for the creepy horse… keep your eye on him.

But Parousia was not free from guilt, and some members of our entourage became the instigators and ended up dragging the innocent ones into bad situations.

Here’s how it went down… a month ago in May, when Parousia first came to perform at the Eagles Roost in Olcott, the town had a friendly ‘open container’ law. You could walk up and down the strip sipping a beer and no one would screw with you! How cool is that?

Fast forward one month later to tonight, when apparently, unbeknownst to us, the town of Newfane changed the open container law to NO OPEN CONTAINER. Yeesh, you’d think they would have posted that somewhere in big letters on a billboard… but no.

Rumors going around suggested the sudden change in law was a premeditated trap to nail troublesome “out of towners”, which unfortunately described Parousia’s invading entourage to a tee. 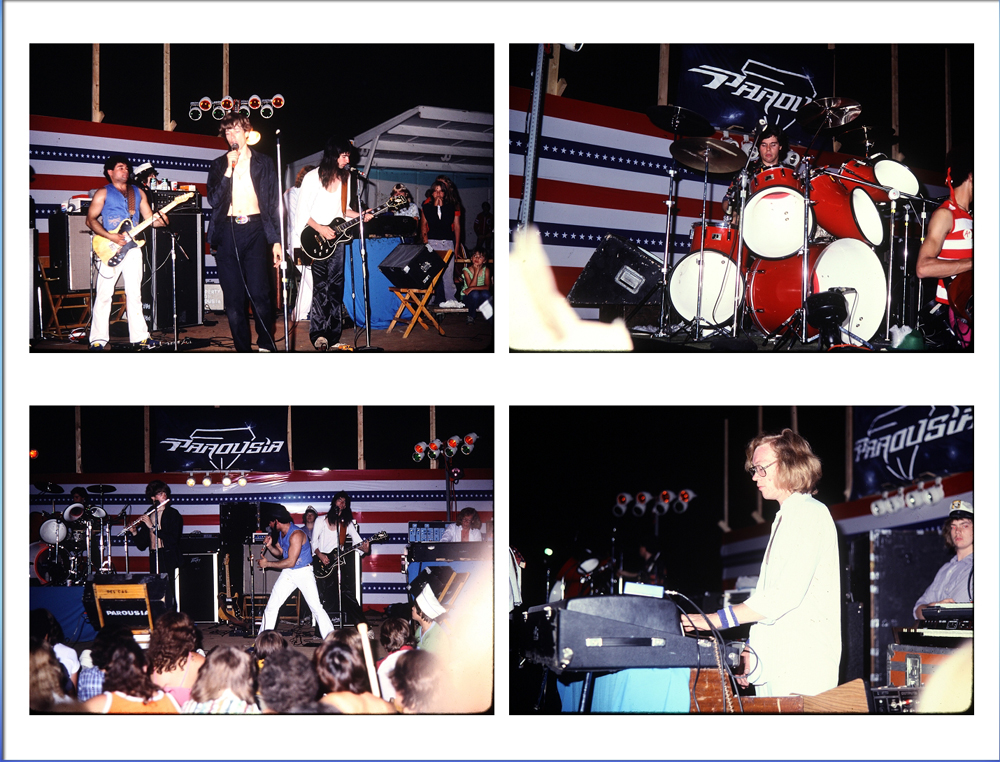 The new law created a golden opportunity for law enforcement to write tickets and increase city revenues by catching every fly caught in the web. Was this the police chief’s solution to a financial crisis brought on by reduced profits and waning tourism at Olcott beach harbor? H-m-m-m-m?? But as I said earlier, Parousia’s entourage was not entirely free from guilt, there was a third factor contributing to the situation. Allow me to elaborate…

After the crew finished unloading the U-haul we all had some time to kill before setting up the stage. Some of the roadies went next door for a few drinks, including ‘Steve’. Steve was a friend of our lighting tech, Mike Carroll. Although Steve was good at lifting stuff, he was a bit of a droog and prone to “a bit of the old ultraviolence”. 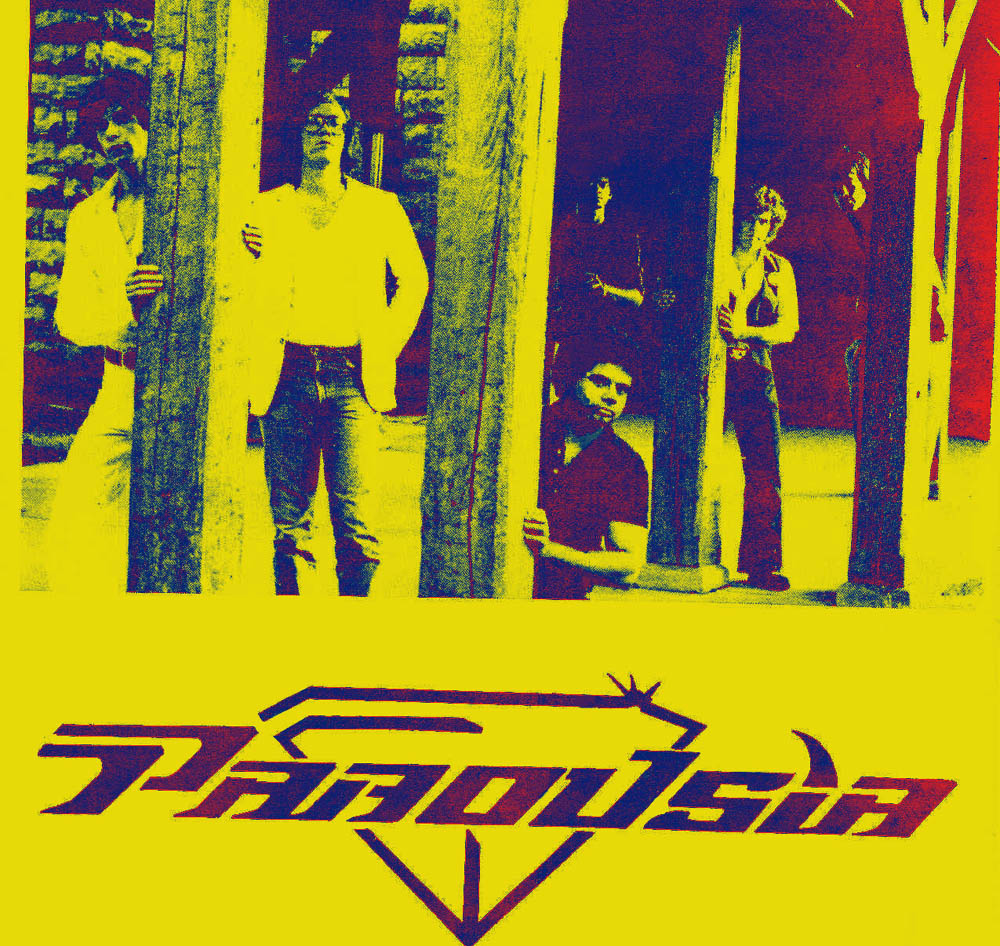 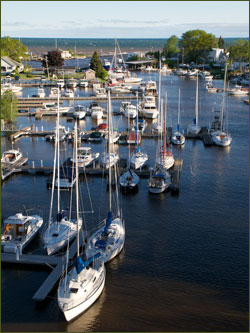 It wasn’t long before Steve became drunk, bored, and started whipping rocks into the water just outside of the Eagles Roost. I mean BIG rocks… he scared away flocks of seagulls and the commotion drew concerns from people nearby.

Steve was doing this next to a big lavish home that overlooked the water, exactly where the rocks were going Ker-PLUNK – Ker-SPLOOSH and in that house lived the Mayor…

The Mayor didn’t appreciate Steve’s reckless rock-throwing and in less than an hour later the boys in blue came and arrested Patt Connolly, Eric Scheda, Dave Styn and ‘Steve the trouble maker’.

The guys were hanging out in front of the bar, on the sidewalk drinking beers. They were now considered in violation of the new open container law enacted a week ago. The fine was $25.00 each, (which was kinda’ felt like $100 back in 1981). 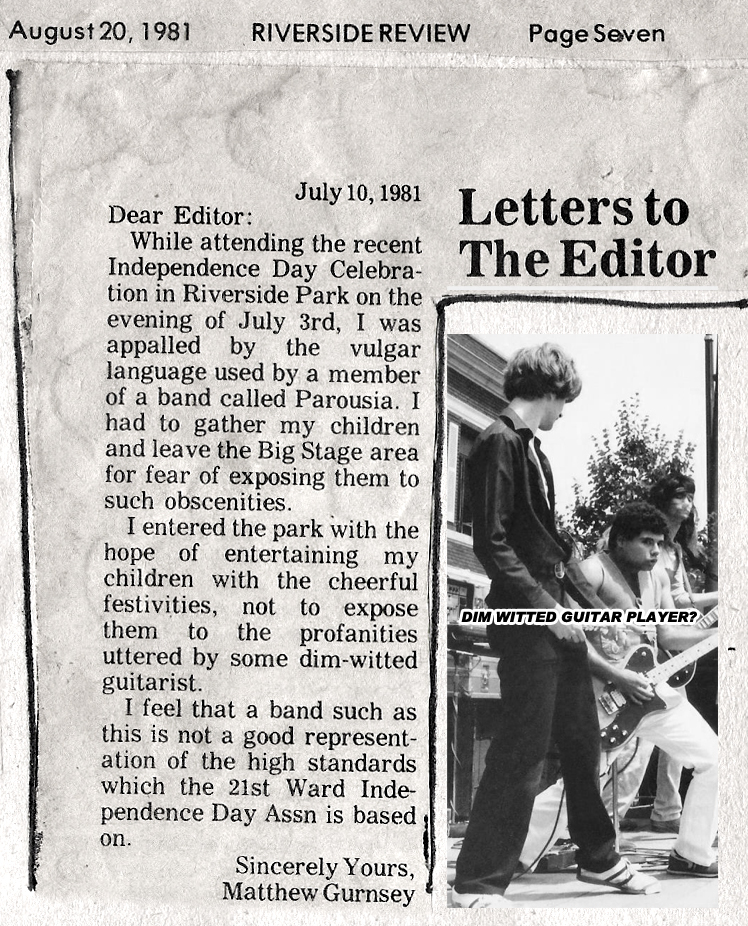 The money hit was bad enough, but my real worry was that Steve might go ballistic and get us thrown out of town… no gig, no money. Well, sure enough, Steve was obnoxious, disrespectful to authority and the police wouldn’t stand for it. They took all of them down to the station to be arrested. Great, no lead singer, no keyboard player and now there were no roadies to help with the stage set up!

So, Bob Lowden and I were left on our own to do it all. I remember when we both carried my clumsy and onerous ‘white elephant’ of a drum platform. UGH! That platform was the bane of my existence. It was incredibly heavy and in two sections, with layers of carpet glued on top of plywood. Each section was six feet by 8 feet and needed a minimum two people to lift and carry each section. Bob and I did the best we could and carried it several yards before it got too heavy. When it came time to drop it, Bob just let go of his end suddenly, and it slammed to the ground. 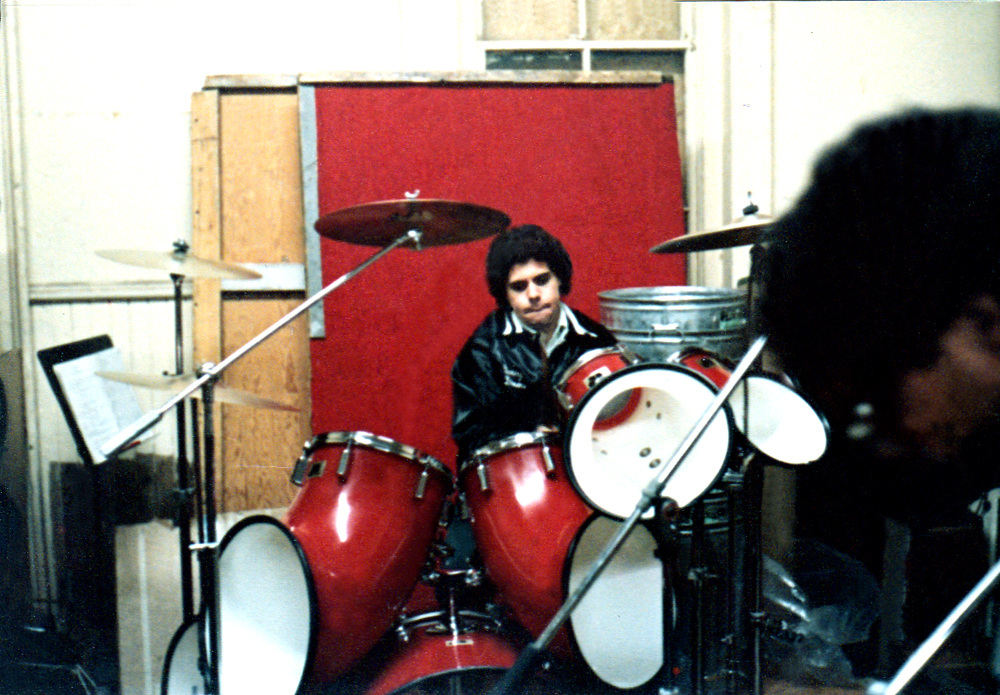 That should have smashed my fingers to the floor but it was my Sapphire ring that protected my hand and stopped the platform from crushing it. I remember the ring being wedged between the wooden platform and the floor as I yanked my finger out. The impact put quite a bend in the silver band but I hung on to that ring and still have it today. It’s my good luck charm! 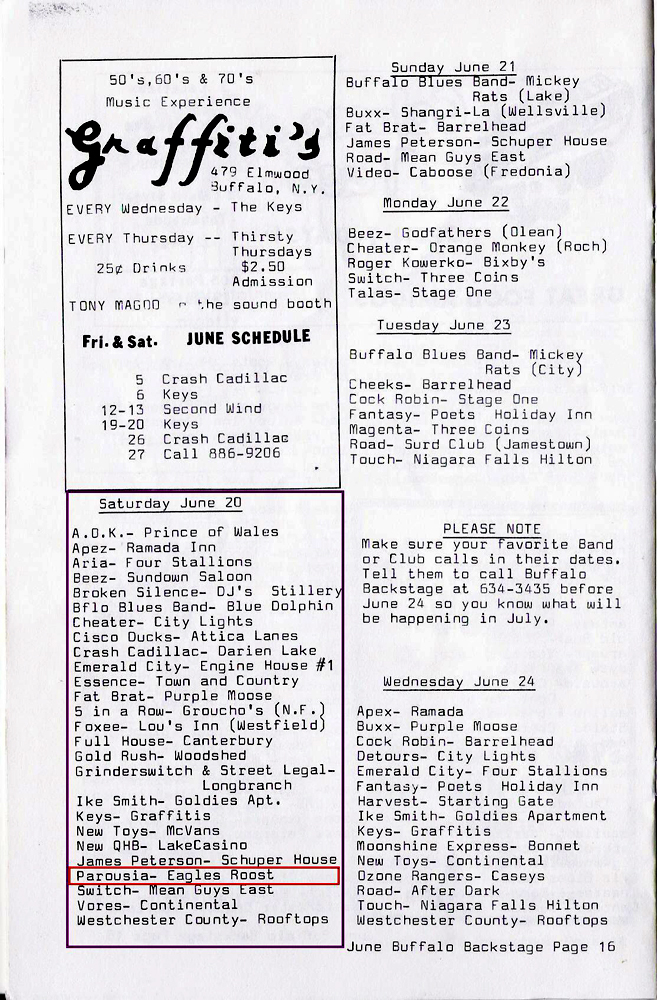 Very close to the start of the show, Eric Scheda and Patt Connolly returned from their arrest and fine. There wasn’t much time to prepare for the launch of Parousia’s NEW ‘Good versus Evil’ show-set. When Kim Watts left the band in May, we had to replace all her tunes with new ones. To fill the gap, the band took on challenging songs like “Perpetual Change” by Yes, “Squonk” and “Abacab” by Genesis to ‘beef up’ our progressive catalog of cover tunes and the fans liked it. On this particular night, in honor of Eric’s arrest, Eric Scheda and I played a cover of the song “Hoe Down” by ELP. 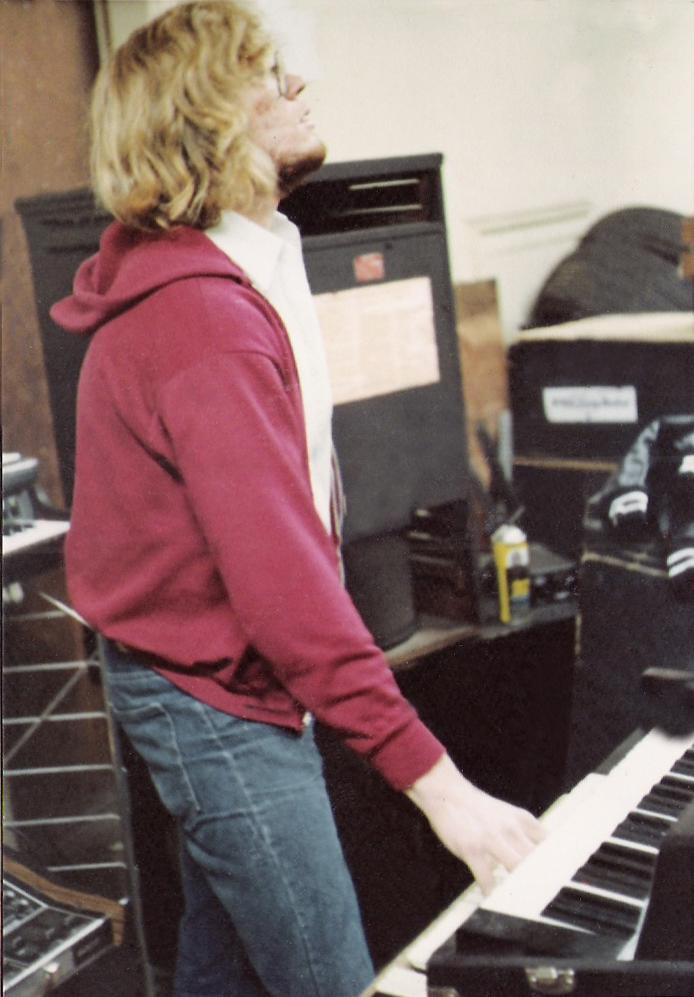