Parousia’s first ‘big gig’ was at Saint Joseph’s Collegiate Institute for the Muscular Dystrophy Association Variety Show on December 18th, 1975…  This was ‘big’ in the sense that this was our first venue outside of our neighborhood school, “All Saints” in Riverside.

At the time, Mike, Patt, and I were students at St. Joe’s.  This put extra pressure on the three of us.  We knew that if our fellow students hated our performance, we would have to deal with that blow-back everyday at school for the next four years!  Barry went to Cardinal Dougherty and Steve went to Hutch Tech, so those two didn’t have the same kind of anxiety the rest of us did. 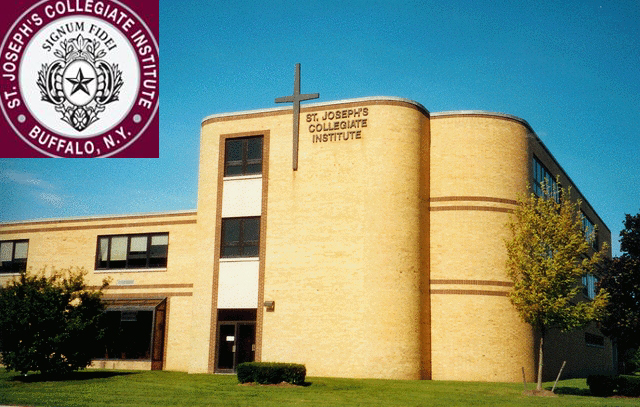 In autumn of 1975 when Mike Newell joined the band, Parousia began rehearsing in Newell’s basement on Payne Avenue, in N. Tonawanda.  It smelled a lot better than the last place we rehearsed in and we were indoors with heat and air conditioning!  Often Newell’s Mom would make us popcorn and serve refreshments.

To prepare for the St. Joe’s gig, we rehearsed several nights a week all through November & December.  We thought we were ready to change the world or at least blow some minds out with our performance.  When the night of the show came, the adrenaline started to kick-in, just in time for breaking down the equipment, loading-in and setting-up.  We stuffed everything into a station wagon and just as we were cramming my snare stand into the back, the trunk smashed down on the leg of my stand snapping it off.  >Ugh< not a good moment…

When we got to the school, we looked around frantically for something to fix the problem but all we could find was a roll of duct tape and we did the best we could to bind the leg together…. (well enough to get through three songs with me pounding away on the snare drum like ‘Animal’ from the Muppets). 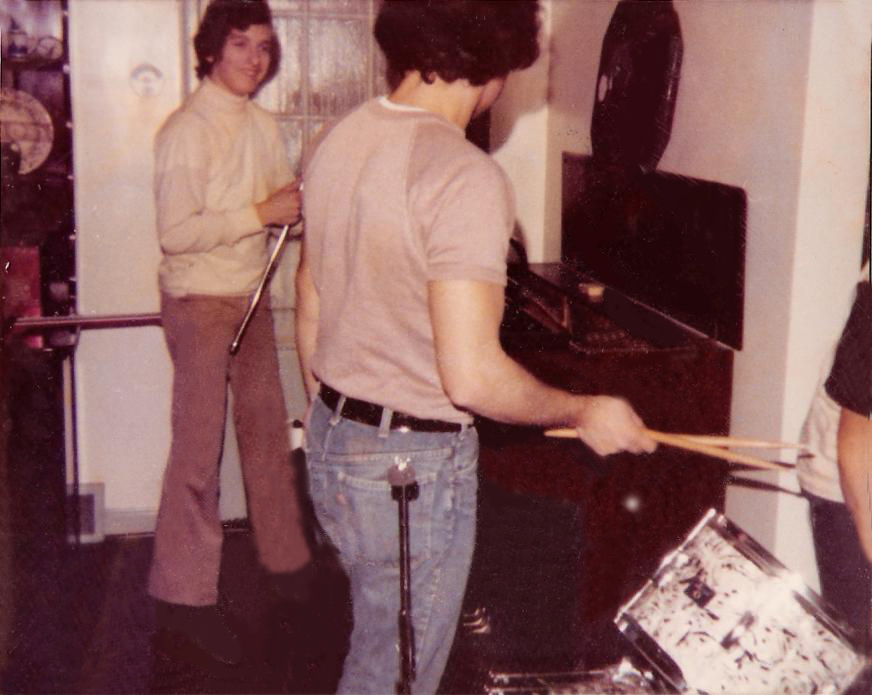 The fix didn’t go too well… just then the drummer of the school lab band, Ray DeMarchi asked if he could borrow my drum set  to play “Goodbye Yellow Brick Road” in a duet with pianist Joe Grano.   “Sure”, I said… I was just too embarrassed to tell him the stand was broke!

Not long after Ray started playing, the stand collapsed and he tried to hold the snare drum in place with his knee.  I guess I should have mentioned the damaged stand… oops!  Anyway, he was not happy about that one! 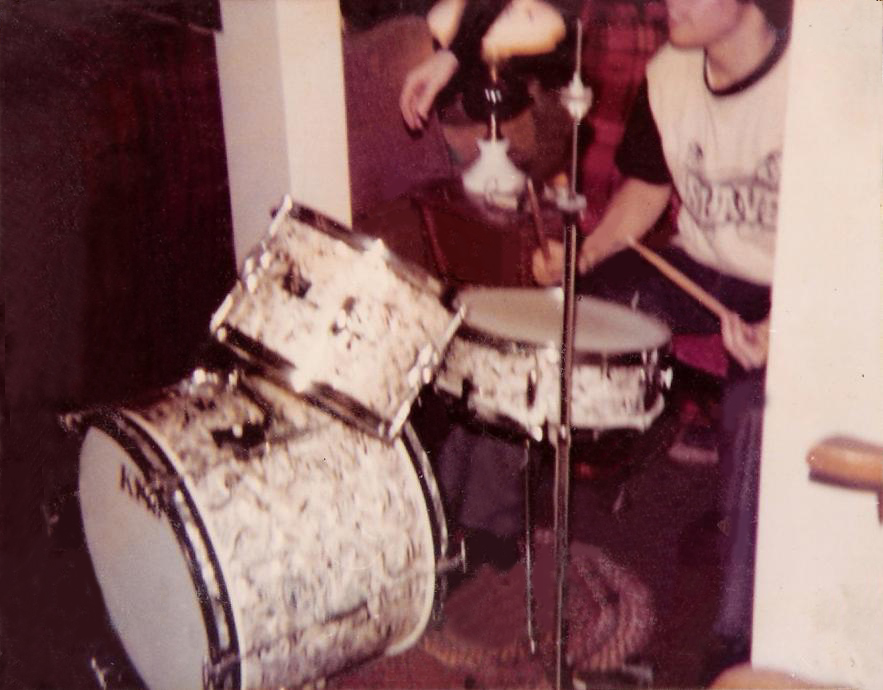 Gerry banging on the drums at Mike Newell’s house Dec 17 1975 (Mike’s mom was ecstatic, we’re sure)

The show was now in intermission.  That gave the band enough time to repair the leg of the snare stand using more duct tape and more prayers, hoping I would have better luck keeping it together than Ray.

After floundering around with the set up of equipment, we hit the stage.  Everyone we knew was in the audience.  I saw all my friends from Riverside, my Mom and Dad, my girlfriend.  I was scared to death; except for Mike Newell who seemed right at home in front of the stage with his bass amp.

Patt hid behind Mike Newell so it is difficult to see him in this picture.  If you look real hard at the photo below, you can see him wearing a grey shirt standing behind Mike.  Steve was to the right of Patt and was in his own little world sitting behind the piano borrowed from the school.  My brother was to the left of me and out of the frame of the picture (although you can see his head a little bit). 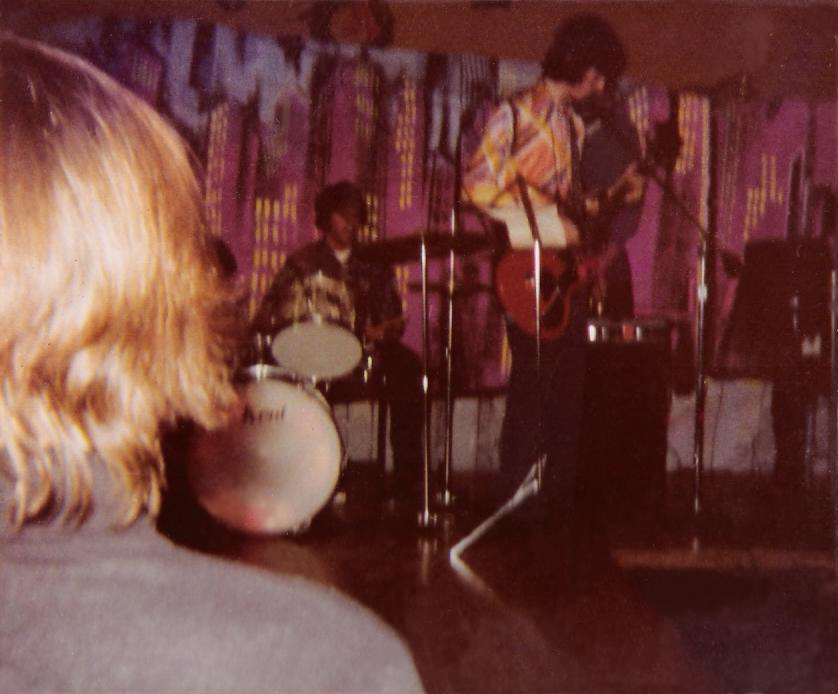 Parousia’s Performance at SJCI 12.18.1975 Portends A Musical Force To Be Reckoned With

Parousia performed three songs that night, “Aqualung” by Jethro Tull, “Chameleon” by Herbie Hancock and “Crystal City” an original tune inspired by the bass line from the song “Iron Man” by Black Sabbath.  One thing for sure, we really were different than any other act that performed that evening.  After we were done, people sat in their chairs stunned, with their mouths hanging open, “what was that?”   We performed an incredibly strange show!

I mean here we were, at this soft, mellow, fluffy charity event with upper middle class parents and their children and yet we were belting out rock songs with ‘questionable’ lyrics like “Sitting on a park bench, Eyeing little girls with bad intent.” “Snot running down his nose, greasy fingers smearing shabby clothes.” and last but not least, “Where is justice..? Up my ass!”

Oh yeah, people were shocked… and yet we realized that meant people noticed us and talked about us, even if some of the words they used to describe us were, “disgusting”, and “frightful” – – we learned that when it comes to rock’n’roll, any press is good press, if it makes a lasting impression. After this show, we were officially not “nice boys” anymore… and it was true, Parousia, who had started out as a bunch of school boys who worked for the neighborhood church, suddenly turned to the ‘dark side’.  Adults who once looked upon us with favor now began to turn their backs.  They thought we were “headed down the wrong road” and in the realm of rock musicdom, that was a good thing for adults to think about us.

Parousia, excited about the “deal” they just signed in blood down at ‘the Crossroads’

Parousia with the 1st band logo 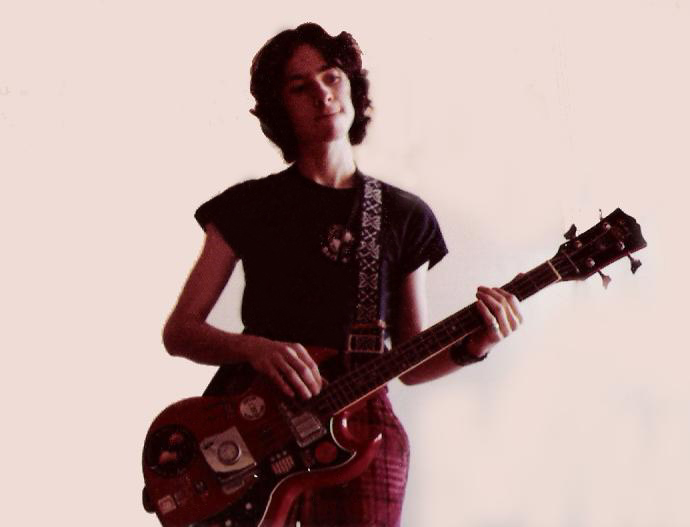 Two months after the St. Joe’s gig, the band grew again when we recruited lead guitarist John McGovern to join up with Parousia. This acquisition allowed us to expand our repertoire to include covers of harder-edged contemporary rock classics and gave us the talent we needed to have a fighting chance to compete with the bigger rock bands in the area for gigs at school dances and local outdoor music events.