On Saturday afternoon, June 6, 1981 at 2:00 pm Patt & Gerry sat in the studio of WGRQ radio to talk about the band’s upcoming shows. (The interview was then re-broadcast on June 13th and 14th.) 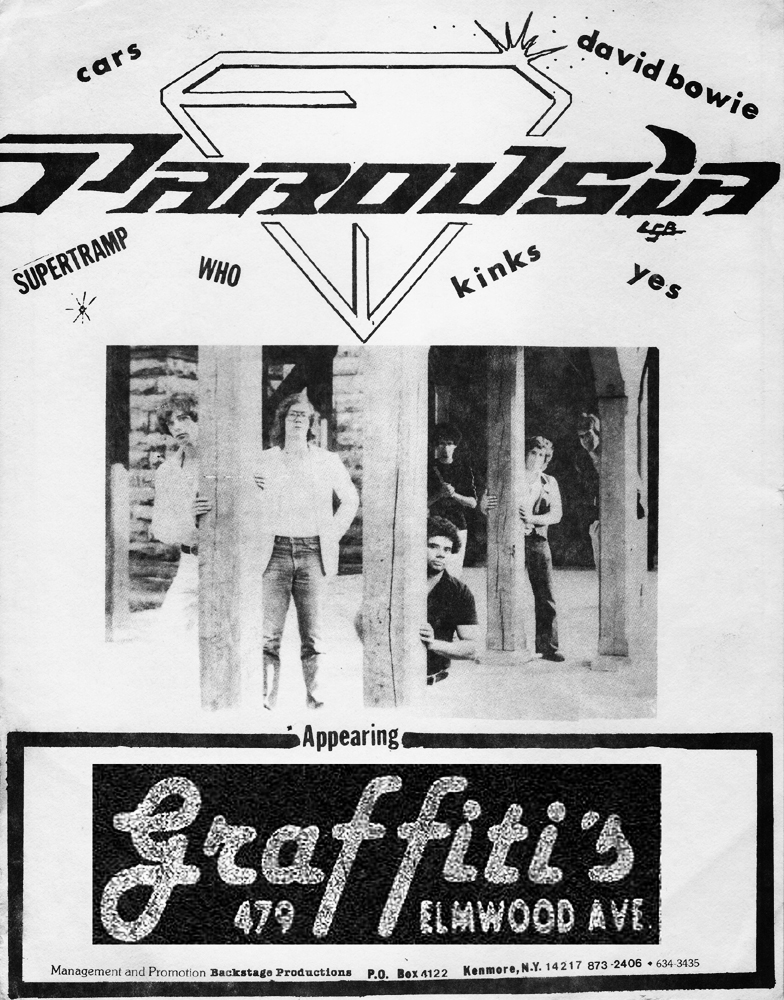 That same night, Parousia played gig #2 at Graffiti’s and it was a bit of a technological nightmare. It was one of those gigs where you end up wishing you could go back in time and change it all… that bad.

At this point in the band’s development, we were broke and dwindling fast was whatever savings we had built up playing the better paying shows. Most clubs paid $250.00 a night, but too often that was not enough to effectively produce and maintain a live-show consisting of a six-member rock band rock band plus road crew.

In a bad decision to save costs, we had our ‘head-roadie’ Dave Styn mix the band and work the sound board to cut costs. Dave didn’t have any real experience running sound, just what he picked up watching our former sound engineers. Dave Styn, working out the kinks in the P.A.

One of those former sound engineers was the recently departed Gregg Filippone. Having graduated from college, Gregg moved on to a more lucrative career working live sound for a local Beatles cover band called the Keys, a steady good-paying gig, and Gregg was an avid Beatles fan. However, when convenient, Gregg would agree to take a gig with us, but it would cost us! 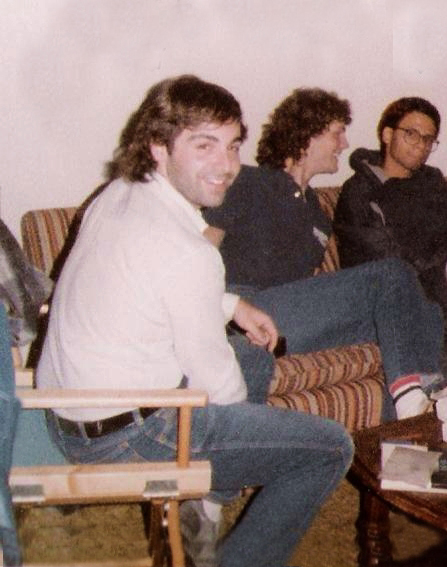 It was the same situation with our second go-to sound man John McGovern. John was very busy working sound for Unistage. But if he could swing it, he would do the gig for the same money we paid Gregg. Expense being what it was, the band could seldom afford to shell-out the money to hire Gregg or John. The band would do it only when the gig was ‘big’ enough in exposure or if the band’s pay was much better than $250.00. 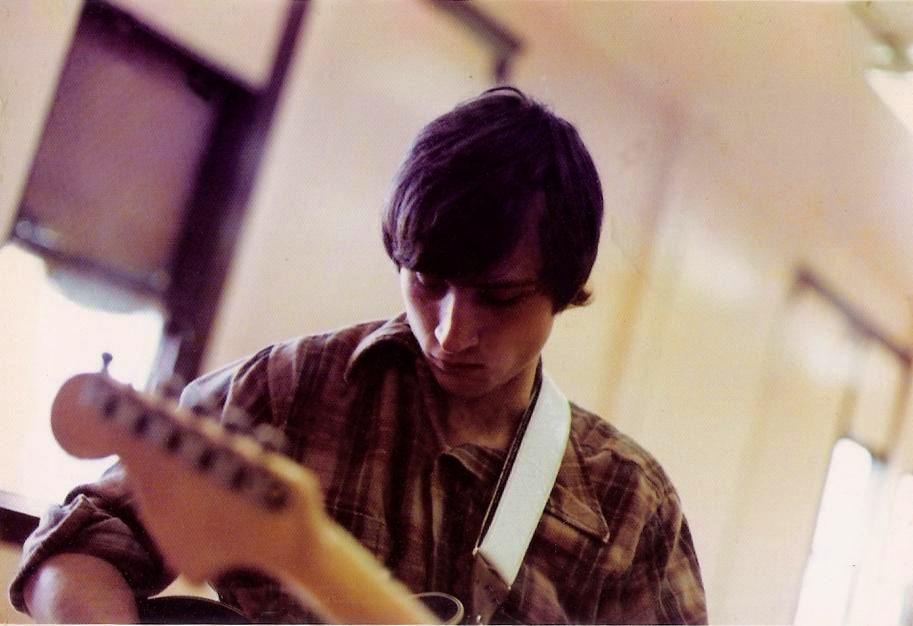 Now that we were in control of our own sound, we were trying to eliminate the problem of “stage bleed”. 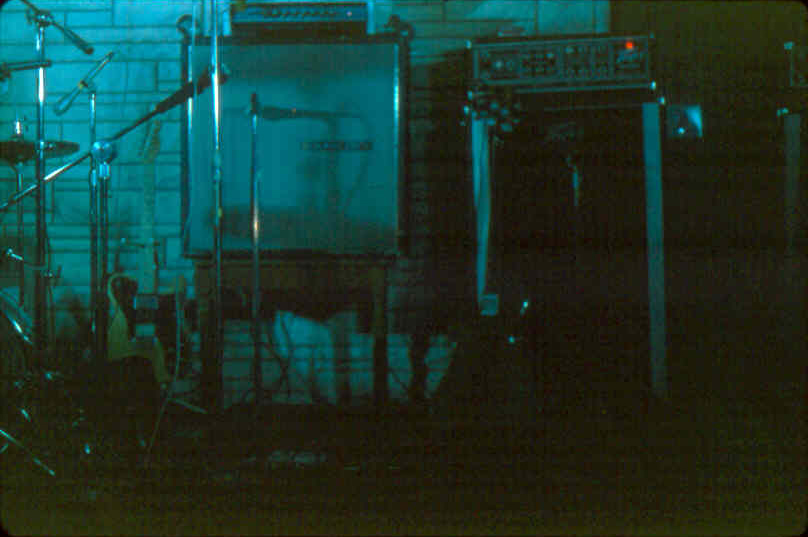 No, stage bleed did not come about from band members, cutting each other with sharp objects on stage, although I can’t say for sure that stuff like that didn’t happen, either out of mutual consent… or from the unpredictable and explosive behavior from some of our band mates. The point is; anyone with sound experience knows the challenge created by the dreaded “stage bleed”. It happens when you have many open mics near each other on the same stage. Those mics are continually blasted by sound coming at them from various sources and directions. For example, a microphone set up to capture and amplify vocals will also amplify the sound of the guitar, drums and bass or whatever else is behind it. Back at the mixing board, when you increase the volume on the vocal channel, you then also inadvertently increase the volume of the drums, guitar and bass too. This makes it all the harder to mix the levels of all the instruments back at the sound board. The better solution is to eliminate the stage bleed by isolating the sound of each instrument to get a clean signal. 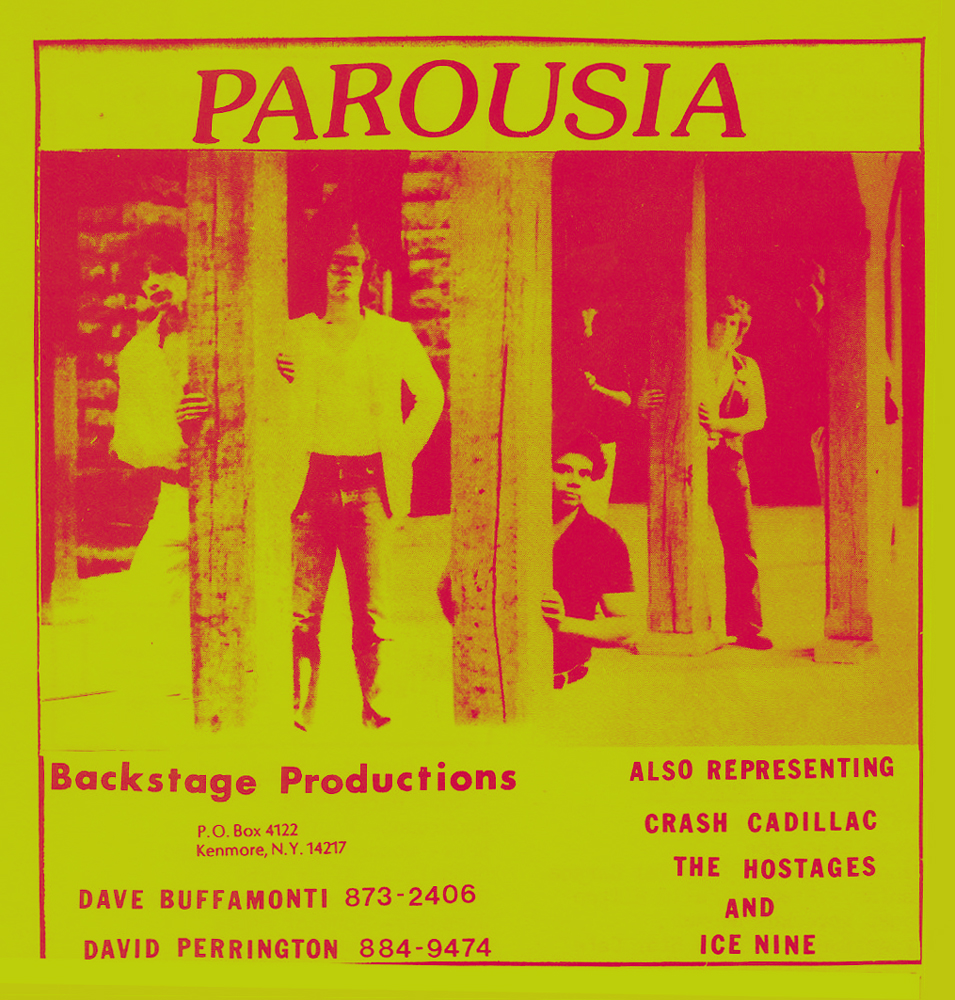 So, following what we thought was a logical conclusion, we proceeded to implement our untested plan on a busy Saturday night at Graffiti’s, (during a high-profile show hosted by 97 Rock, WGRQ). In a bold and stupid (in hind-sight) move, the band opted to use direct boxes on each of the onstage amps instead of the usual microphone stuck in front of the amp grill. Dave ran a cable from the back of the amps into a direct box then straight into the P.A. mixing console. We thought that would give us a cleaner sound on stage, without amp-bleed into the vocal mics, drum mics, etc., but it didn’t work and in fact was a total failure that we found out the hard way. Our first set sounded “a bit rough”. The guitars sounded like buzz saws. After the first set, Dave Styn, removed the direct boxes and switched back to live mics. It just might have saved the night from being a total disaster, if it weren’t for already losing a good portion of the crowd on a 97-Rock event, hosted by Carl Russo, one of their top D.J.’s spinning records between sets. Quite embarrassing and quite likely the reason the band never played at Graffiti’s again. To this day I recall Dave Styn’s comment right after that horrible set. I walked off the stage, directly to the sound board and he said, “Wow that was awful, even I felt sorry for you guys!” 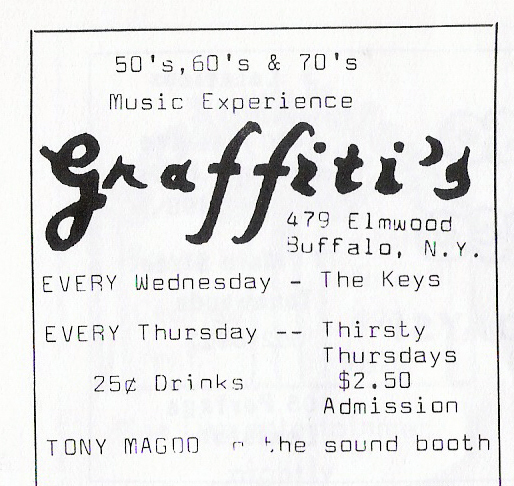 Tonight Parousia earned $225.00 for the second and final gig at Graffiti’s. The rental truck cost $98.00 but it was a shared expense from last night’s gig at Davio’s Restaurant on Niagara Falls Blvd. Rick Falcowski with Back Stage Productions took a 15% booking fee ($34.00). Dave Styn earned $40.00 for running sound and the rest of the road crew earned $65.00 collectively.

This was the last show working with lighting tech Mike Carroll. We said our good-byes, paid him $30.00 for the night and then gave him a $50.00 deposit to purchase his light show. The sale included Pars, bulbs, clamps, light board and truss. Now, Keith Huels would be in charge of setting up and running lights and got a bump in pay for his new title. All in all expense totaled $237.00, $12.00 over budget!

In the spring of 2019, after distributing and promoting “Moon Dogs”, (Parousia’s first two new studio recordings in over 30 years), the band discussed writing and recording a Christmas Song for release in December 2019. Discussions turned into planning and…