In March of 1981, Dino, the manager of Dad’s Café, watched  Parousia perform at Fast Annie’s in Hamburg NY.  When he heard us play our set of alternative rock tunes, he just had to have us at his bar and on that very night he hired us to perform at his club, Dad’s Cafe on Clinton Street.  From our very first show to the very last, Dad’s became one of our most favorite places to play in Buffalo, NY.

All-in-all we played six shows at Dad’s Cafe and for whatever reason, all of them were on a Thursday night.  We thought it was a great way to kick-off a weekend of gigs and, although the place was small, the audience was terrific.  They were supreme to-the-max party animals and we loved playing for them.  At every show, we packed them in like sardines.  The club was so small, we only had room for half of our P.A. system and that was all we needed.  It was a miracle we fit all our instruments against the wall in back.  I had to play my drums behind the P.A., up on a platform.  We didn’t even need to mic up my kit and we were still incredibly loud!

Putting on a performance at Dad’s was always a bit of a challenge for the band as well as the sound and light crew because of the limitations in the club’s AC power.  Mike Carroll was the son of an electrical engineer and he knew how to tap into the main electric box with alligator clamps in order to give us enough juice to run our entire show. Very dangerous stuff, but it was the only way we could put on the kind of performance that Dino and the audience paid to see and hear. Parousia’s first show away from the cemetery at Dad’s Cafe, April 16th, 1981

Our first show at Dad’s on April 16, 1981 we were paid $230.00 for the night, roughly 10:00 pm – 2:00 am.  Dave Styn ran the sound board and was paid $40.00. Mr. Styn had risen to the esteemed position of “head roadie” which meant besides lifting and setting up gear, he told the other roadies what to do and how to do it.  Mike Carroll, our lighting technician set up and ran the lights for $35.00 a night. Later we bumped him up to $40.00.  He was also very handy when it came to re-routing electricity.  Dave’s brother, Steve Styn was becoming a quality road rat and despite the unending amount of work it took to put on and maintain the show, Steve kept coming back for $10.00 a night.  We split the booking fee between Backstage Productions ($10.00) and Plus II ($20.00). Renting the equipment truck cost us $42.00 and Barry was paid $5.00 for gas to drive us to and from the gig. 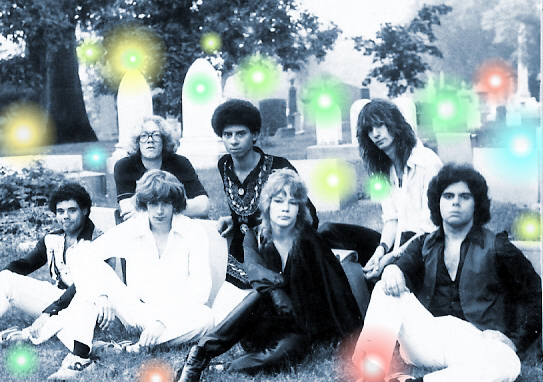 Parousia leaves the cemetery and returns to Dad’s Cafe. May 21st, 1981

Our return gig at Dad’s Cafe on May 21st we were paid $200.00.  Both Dave Styn and Mike Carroll were paid $40.00 each.  We had two more roadies this night, “Keith Huels and Bob’s friend” and paid them each $10.00. The truck cost was deferred ’cause we were playing tomorrow night at the club, ‘New York, New York’.   Backstage Productions (Rick) took their fee of 15% ($30.00) and besides the usual gasoline expense, we had to pay off Dave Maltbie, (Parousia’s ex-keyboard player and part owner of the Moog sonic six synthesizer).  Since Dave wasn’t in the band anymore, we had to pay off his interest in the synth.  Oh, and we had to buy a new tape for the Maestro Echoplex. Not cheap at $20.00 a pop.

I remember the July 23rd show, it was summer vacation and the college kids were in heavy party mode.  We were wrapping up our second set for the night with the powerful rock anthem “Won’t Get Fooled Again”.  If you know the song, you will know the part right after the organ interlude where the drums roll in with a thunderous rise to a crescendo, crowned with a power chord layered with a guttural scream of “YEAH!”  Well just as we hit that orgasmic moment in the song the power blew out and there we were… stuck in the dark with no power and the audience frothing at the mouth waiting for us to give them ‘the big finish’.

Once our road crew got the power up, we started playing the song again from the beginning, and the same thing happened at the crescendo… We decided that on this go-round we would start the song at the crescendo and it worked!  We all jumped in right on cue as if there were no break at all and then rode the wave to the end.  The audience went crazy for that, they loved it.  We went on break which gave us another 15 minutes to sort out the power issues before performing our last set of songs on this summers evening.  Looking back, I’m just glad that Dad’s Café never burned down unlike some of the other clubs we played at.

We were paid $200.00 for the July 23rd show.  It was the first gig in a string of three for us. Tomorrow night, (Friday) we were playing an all age show at The Teen Hot-Spot in Depew NY and then Saturday, we were looking forward to our concert across the Canadian border at the Humberstone West-Side Arena in Port Colborne.  Plus II was our booking agent for this show and the Port Colborne show, taking their usual 15%.  In addition to our usual sound and light crew (Dave and Mike), we had one roadie to push around, Steve Styn.

It was Christmas Break for the college kids and we had a packed house tonight!  Parousia made $225.00 and my brother Barry was given a $5.00 as a tip from an appreciative fan for singing “Free Bird”. Hey, I did a great job playing the drums on that eight minute extravaganza of a southern rock song… where’s my five bucks..? Hurrumph! 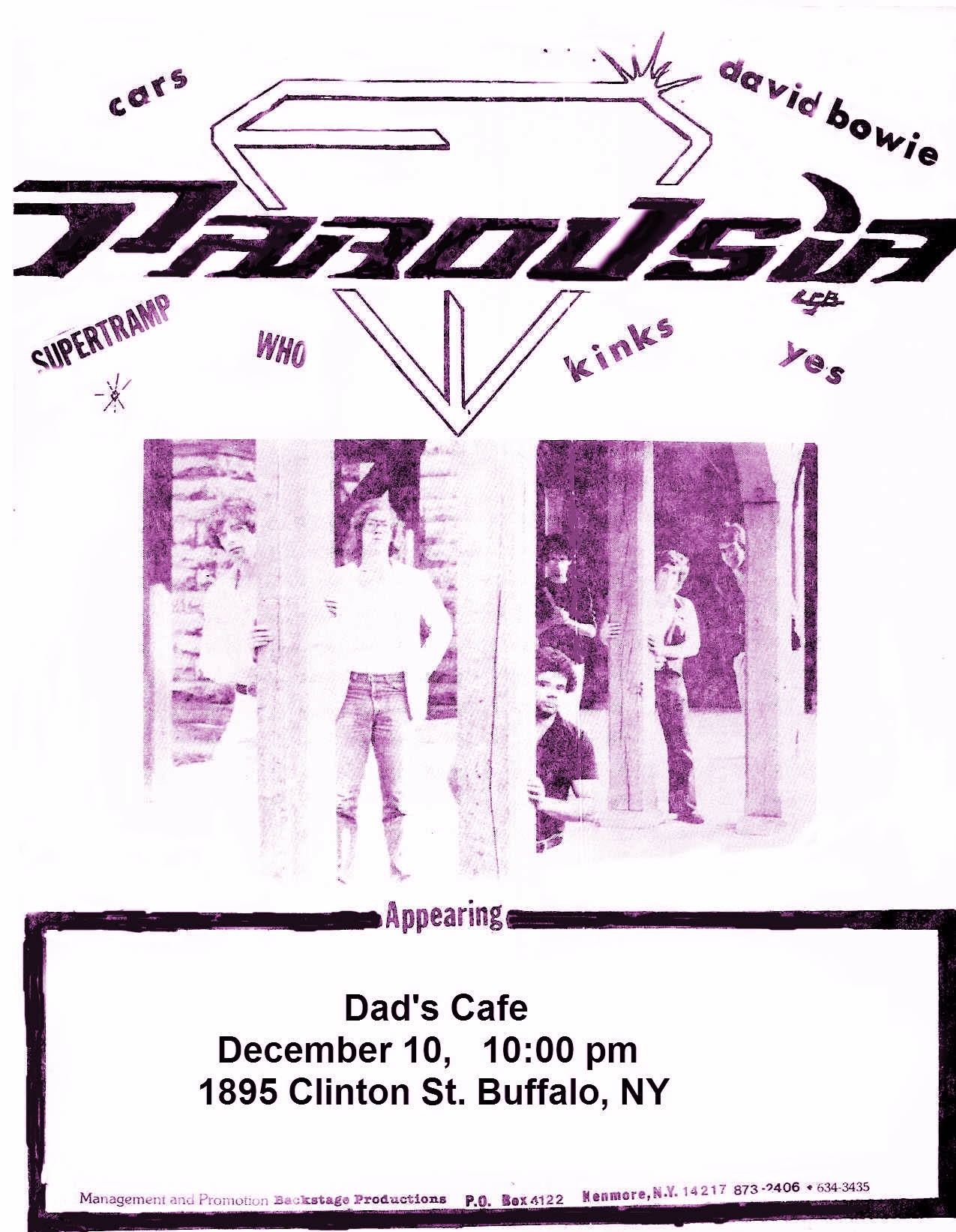 The Parousia gang leaves the hideout to enhance your Holiday Cheer at Dad’s Cafe December 10, 1981

Also referred to as the “Summer Beach Party in January” gig.  A special event at Dad’s Cafe.
We didn’t know this would be our last show at our favorite little club with a big heart. Nor did we know the events that were to befall us in the months ahead would eventually bring the band in its present form to its demise. Our very next gig was like a hammer hitting a nail into the coffin of Parousia.  I’m referring to our trip to beautiful downtown Burlington, Vermont. to perform at a venue called “the Texas”.   While the scenery was breath-taking, the gig was soul-crushing.  You can read about the downward spiral here: Parousia At “The Texas” In Burlington, VT February 9-13,1982 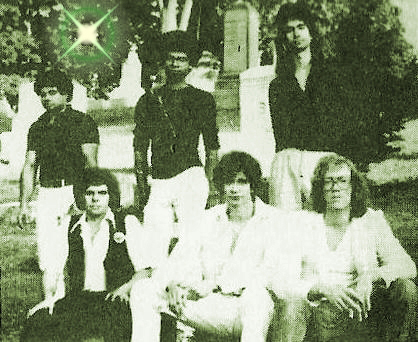 Parousia performed one last show at Dad’s Cafe on January 21st, 1982. Then we returned to the cemetery to practice our necromancy…