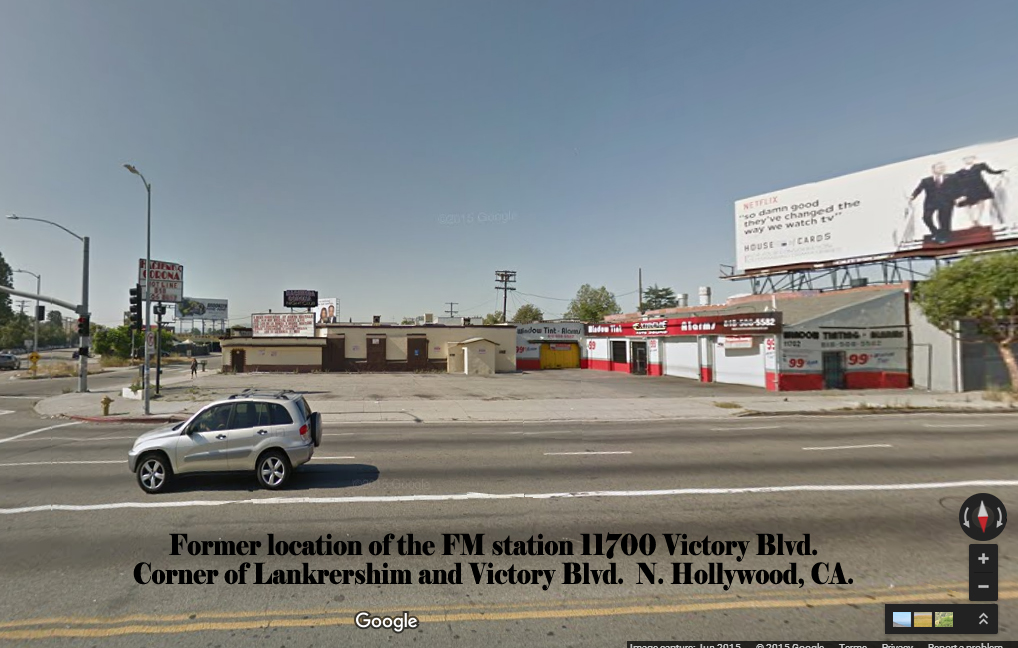 The FM Station Live was one of the most popular rock venues in North Hollywood. Its only other competition at the time was the Palomino Club down the street at 6907 Lankershim, (a club more famous for its rock/country fusion vibe).

Unlike the Palomino, the F.M. Station was pure unadulterated rock.  It was a cool alternative to the rock clubs along the Sunset Strip like the Whisky, the Roxy, Gazzarri’s, Club Lingerie and the Troubadour, plus there was ample parking which didn’t exist in West Hollywood. We looked forward to being a part of it and hitting the F.M. stage for the first time on Wednesday May 24, 1989 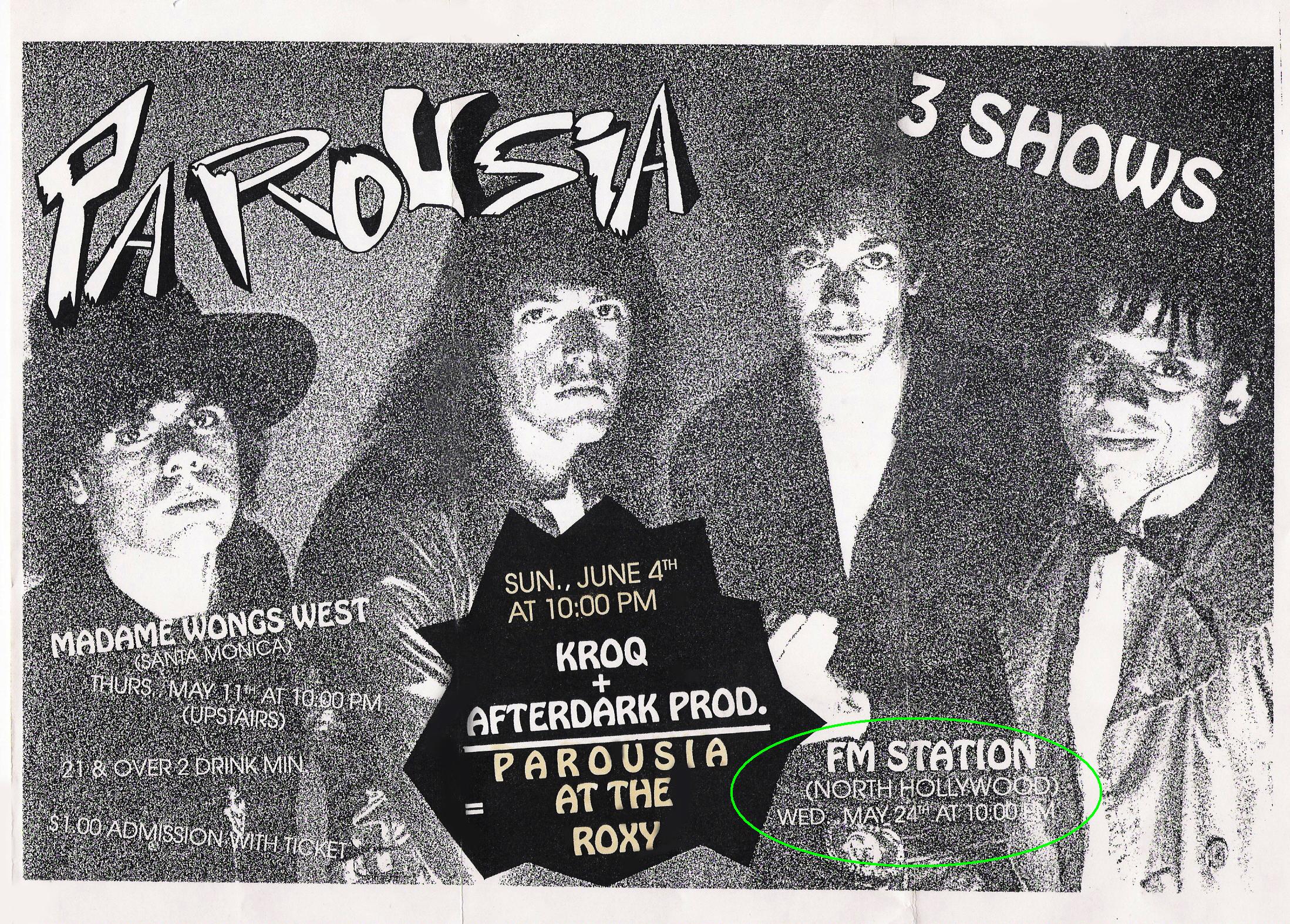 It was founded in 1985 and owned by a biker dude named “Filthy McNasty” (owner of the original Filthy McNasty’s which is now the Sunset Strip Viper Room).

FM Station was the premier live music venue of the San Fernando Valley and was the favorite watering hole for many of the music industry’s shiniest of stars, and was often coveted as their ‘nasty’ little secret. On any given night, you could find the members of Motley Crue, Kiss, Guns and Roses, Great White, Metallica, Motorhead etc. followed around by local hopefuls striving for a grab at the proverbial brass ring known as a record deal.

Many a glam-metal band passed through the hallowed halls of the FM Station Live and the club helped launch the careers of well-known acts such as Poison, Warrant, Bullet Boys, Bang-Tango, L.A. Guns, Femme Fatale, WWIII, and many others.  Mike Inez, bassist for Alice in Chains, toasted his first gig playing for Ozzy Osbourne here. Ralph Saenz, singer for Metal Skool now known as Steel Panther and Atomic Punks, actually played with original band, Long Gone, at FM. Kiss Tribute band, Cold Gin played their first gig here without make-up. LAFD often reined its authority at the Station after fans stood patiently in quarter mile lines down Victory Blvd, waiting for WWIII and Warbride to hit the stage. 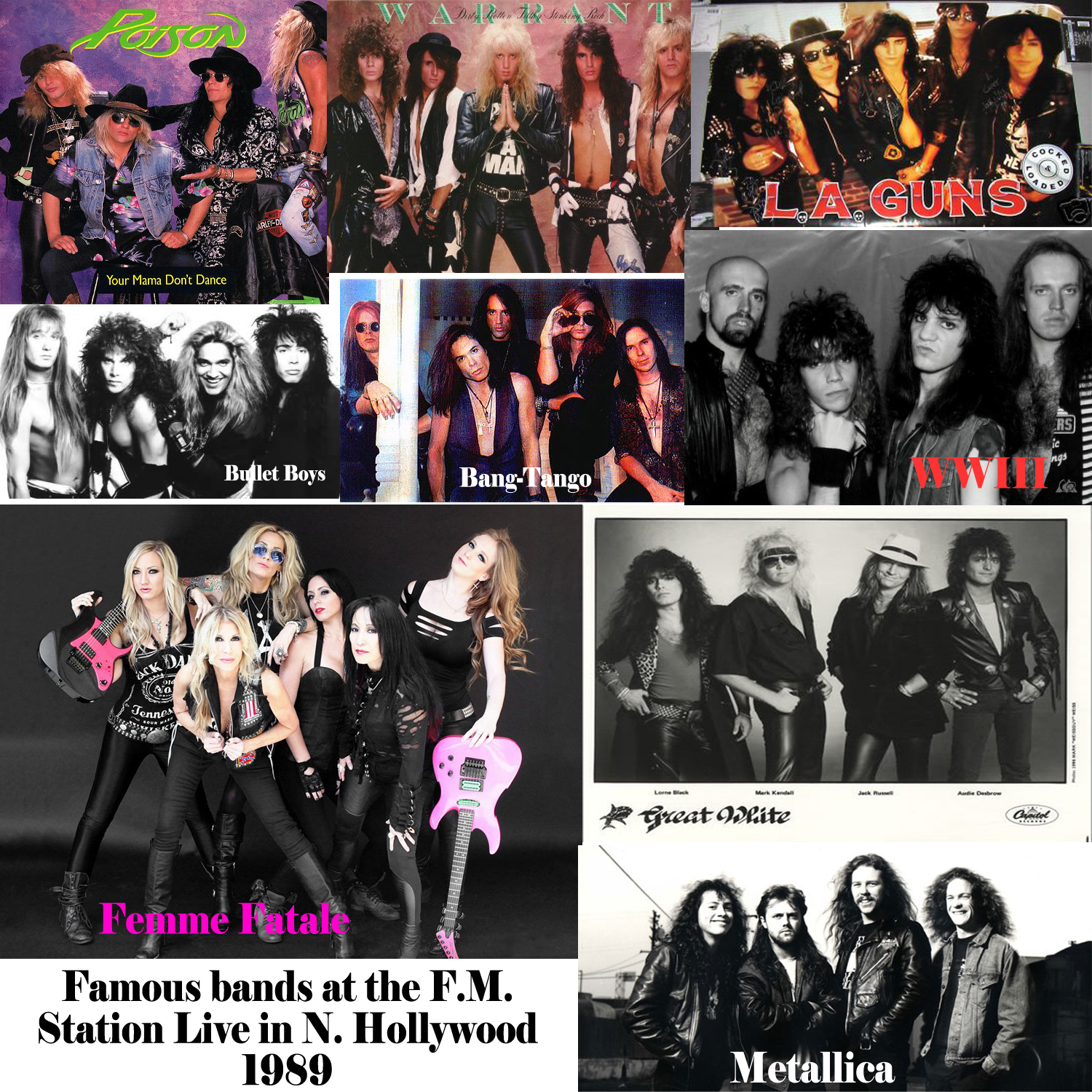 For the young and single, FM was the only place (trust me on this) where you could take home the hottest of hot at 8pm on a Wed – and then arrive back at midnight to leave with someone even hotter. If you were really on fire, Filthy would ask you to stay after closing on a Friday night to party with him in the VIP lounge until noon on Saturday (and if you worked the next day, oh, well – we were all young then!!)

Unlike the Sunset Strip clubs, Parousia didn’t have to focus an overwhelming amount of energy on the bringing in our own crowd at the F.M. and even on a Wednesday evening the club had plenty of its own patrons coming to hang out. Certainly we would have preferred a weekend gig but hey, with each new club, PAROUSIA had to prove itself over and over again. It was no different with Filthy’s F.M. Station.

Not only was this our first gig at the F.M., it was also our first gig with the dancers Untamed.  An idea we came up with to help our set of music be remembered by an audience that was working hard to alter its own conscious. The dancers were organized and choreographed by Claudine Regian.   Our plan was to have the girls do a dance number to a couple songs in the set, just enough to slap the audience in the face a bit and get their attention.

“Tug of War” our instrumental song was the opening number. The girls also danced to “Place your Bets” in the middle of the set. We chose this club to test out our ‘dancer theory’ because it was close to Hollywood and the Valley (our home base) and the stage was nice and big with plenty of room out in front for the dancers to do their thing. We definitely got the attention of the crowd, for better or worse. We knew what kinks we had to work out of the dance performance before our big debut at The Roxy Theatre ten days later in West Hollywood on the Sunset Strip. 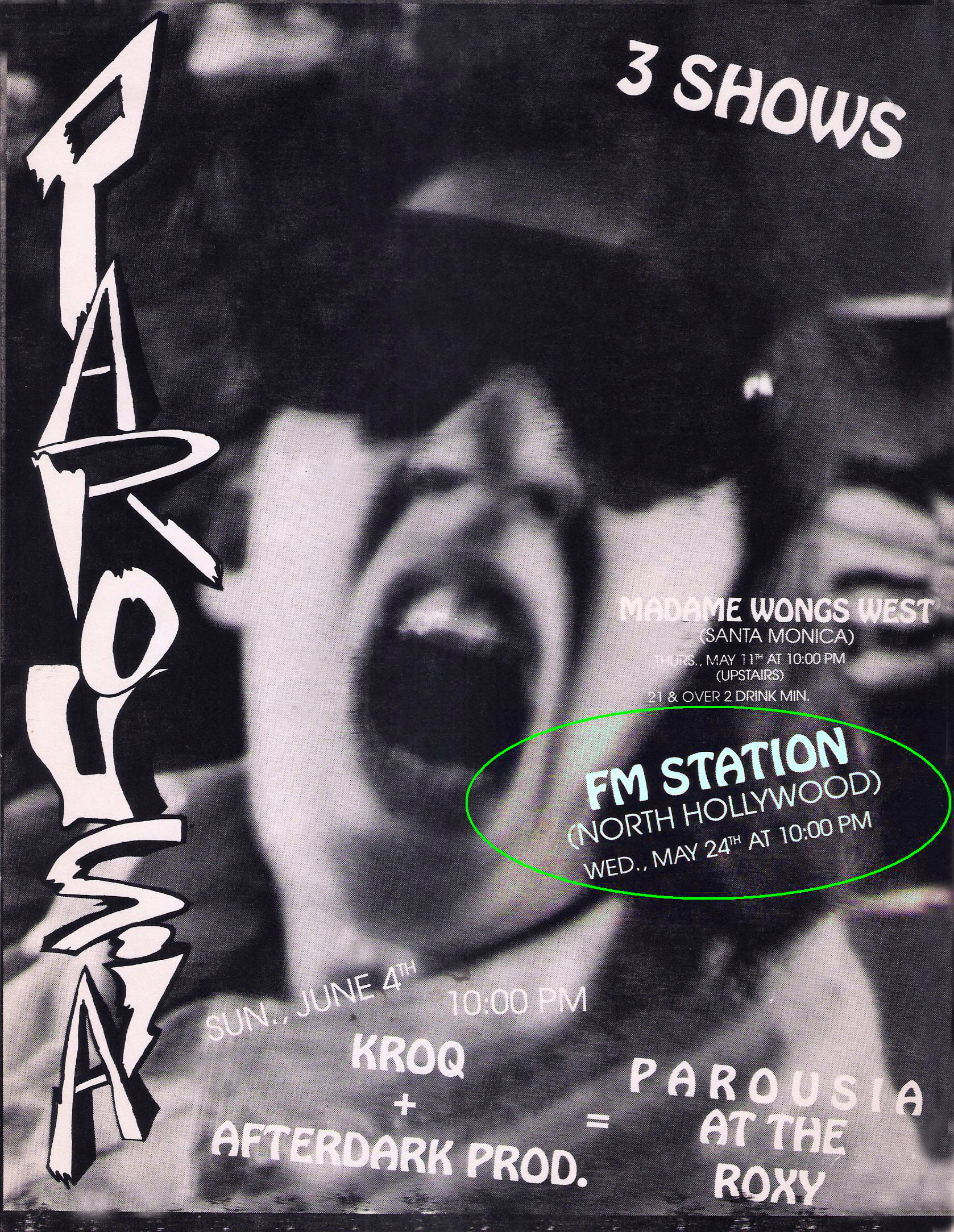 According to the WEHOville news, Filthy McNasty, (aka: F.M.) whose eponymous nightclub was the predecessor to what now is the Viper Room and who also owned F.M. Station in North Hollywood, died of cancer on April 13, 2016 at the age of 73.

A little more background on the F.M. Station owner… Filthy McNasty opened his first club in 1969 after purchasing the “Melody Room”, a pint-sized jazz joint on the Sunset Strip, dubbing it “Filthy McNasty’s”.

Celebrities such as Elvis, Mick Jagger, Jim Morrison and John Wayne appreciated his “no photo” low key environment where they could relax, alter consciousness using… whatever, and then leave with ‘new friends’ without reading about it in the L.A. Times the next morning. 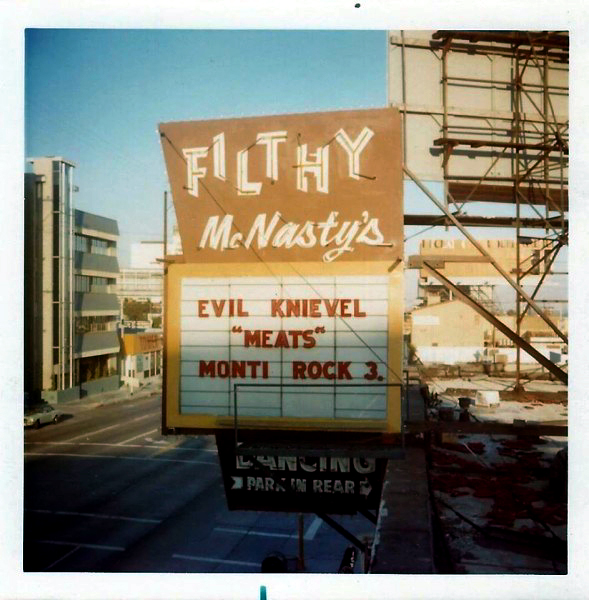 The McNasty brothers sold Filthy McNasty’s, and in the 1980s it was rebranded the Central. “During the 1980s you could easily catch a set by Rickie Lee Jones or bump into John Belushi at The Central,” writes Alison Martino, a major chronicler of the Sunset Strip’s history, in Los Angeles Magazine.

“In 1981, The Who’s John Entwistle participated in an open jam night there on Tuesdays. Mitch Mitchell (of the Jimi Hendrix Experience), Buddy Miles, Les Dudek, Carlos Castenada Jr., C.C. DeVille (before he was in Poison), Pearl (Janis Joplin’s back-up singer) and Ray Gange (the Clash’s roadie and star of “Rude Boy”) would sit in or be seen drinking at the bar.”

Central opened in 1993 as the Viper Room, with actor Johnny Depp then a part owner. It was known for a while as the place where Hollywood celebs hung out and infamously as the place where in 1993 actor River Phoenix died of a drug overdose. Today its owners include Harry Morton, son of Hard Rock Cafe co-founder Peter Morton, who is said to want to turn it into a franchise somewhat like the House of Blues. 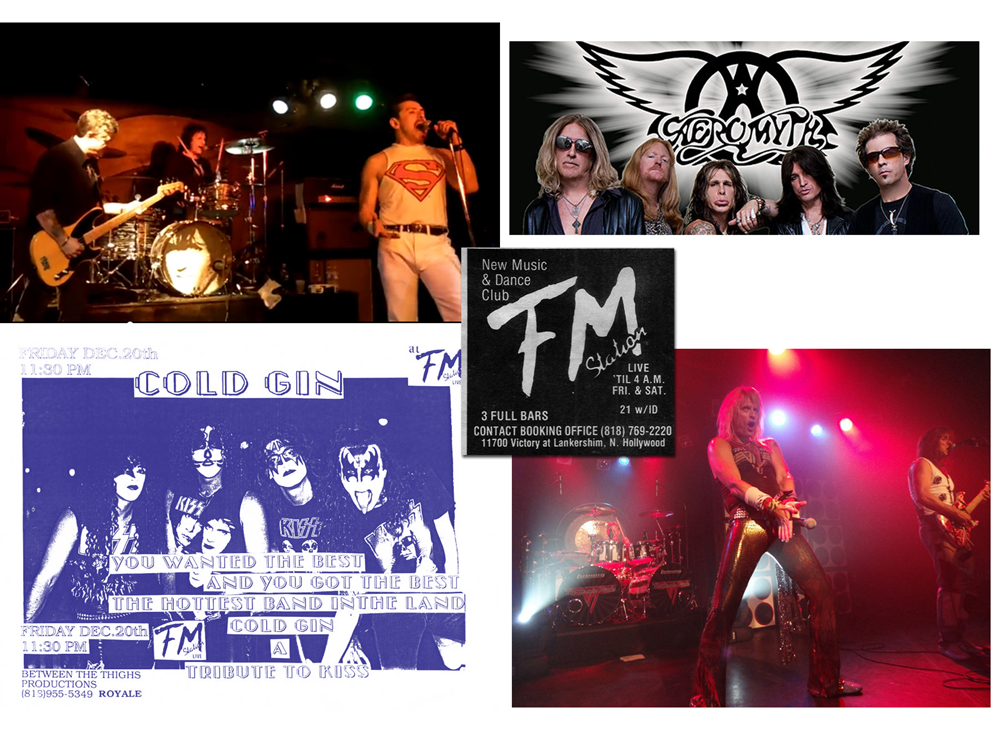 What happened to the F.M. Station?  As the hordes of Hollywood’s hair-band hopefuls packed up their wagons and headed back home, rock and roll proprietor Filthy McNasty knew it was ‘last-call’.

With little notice or fanfare, FM Station Live in North Hollywood, CA closed its doors for good in 1997. One of LA’s premiere live music clubs was gone.

The new owners crowned their investment “Salon Corona” attracting silver-toothed cowboys and the occasional velvet-laced crooner, serenading local Latinas at capacity crowds. A new era had begun. Before closing its doors the club in its final days was well known as a place where you could see some of the best tribute bands in town like “Atomic Punks”, “Aeromyth”, “Cold Gin” and “Sheer Heart Attack.”