This rock club in the middle of nowhere was a great place to perform our show. Gowanda was somewhere (?)  North of Salamanca and East of Fredonia and Southwest from Springville. It was a large venue with a nice stage and an audience with a warm vibe.

Our gig on November 1st was a special night for two reasons… It was a Halloween party and a first year anniversary party for Bill’s Lair. They liked our band so much that we were paid extra money that night, $235.00.  The club owner booked us immediately for a second gig, and we played there again just after Christmas, Saturday December 27th for $275.00!  At Bill’s Lair, we found a very receptive crowd for our unique blend of classic rock and original tunes, which made it a fun club to perform in especially at holiday time.  A special shout out to all you Gowandians who made it memorable,  Woooo!!! 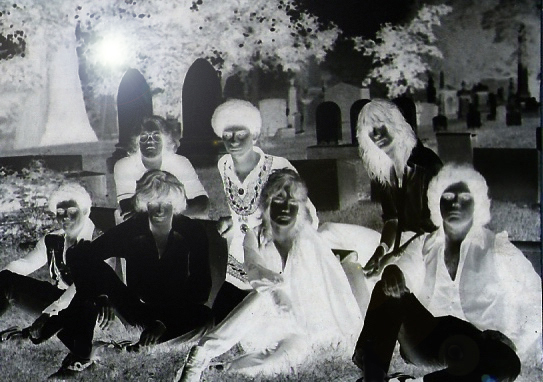 Parousia- Children of the Damned

It looks like a map of Middle Earth but it’s actually the location of Bill’s Lair 9598 Broadway Rd. Gowanda, NY. The club is somewhere next to this tree…

Lenny K. (aka: RMS Sonic Laboratories) was Parousia’s ‘Stage Lighting and Pyrotechnics’ engineer. He started with the band back in 1977 and was a founding member of our road crew.  By the time we played this gig at Bill’s Lair in December 1980, he wasn’t working for us anymore and hadn’t been since November of 1979.

Lenny & Parousia parted ways after our D’Youville College concert.  At the end of that show, two PAR lights that were owned by the college mysteriously went missing from the ceiling above the stage in the PVR room where we were performing. They were hanging alongside Lenny’s equipment.  Once the college noticed them gone, it wasn’t long before D’Youville threatened Parousia with legal action to get them back.  That’s when we put a good deal of pressure on Lenny as to the whereabouts of the missing lights and that’s when he finally admitted to having one and eventually returned it.  He said that he might have accidentally taken them thinking they were part of his equipment. How is this back story significant to our Saturday night gig at Bill’s Lair..?

Well at the end of our Bill’s Lair show, we broke-down all of our equipment and then loaded the truck and delivered it back into our rehearsal room at the Music Mall as we normally did.  All of our equipment was in there and we didn’t know it (or think of it at the time) but Lenny still had a set of keys to our rehearsal room.  On a Sunday afternoon the day after our show, he went in there and without our permission, took a crap-load of our sound equipment. He grabbed both P.A. horns, ($410.00).  Three stage monitors,($300.00).  Both Peavey power amps ($300.00).  Fifteen microphones ($400.00) and the cable box with all of our mic cables, electric cables, etc. ($200.00 minimum).  Essentially he absconded with 90% of our P.A. system!

I’ll never forget how we found out… on that same Sunday evening the entire band drove out to the Music Mall for our regularly scheduled rehearsal.  As soon as we walked into our room we noticed right-away that a lot of our stuff was missing and holy shit no body lent it out to anyone!  We also noticed that a business card from our old friend Lenny K. was pinned lovingly to the bulletin board near the front door. That was odd we thought, no one had seen Lenny for over a year…

We went and tracked down Keith Gregor (the proprietor of the Music Mall) who told us that Lenny had been in our room earlier that day. We asked Keith how he got in… the front door had a combination lock (and Keith was smart enough to change the combination each time a band moved out or if a band member left a group).  Well, apparently Keith thought Lenny was a current member of our road crew and let him in the main door (Keith felt pretty guilty about not remembering that we parted ways). The rest was easy for Lenny since he had a key to our room and we never thought to change our own lock (Doh!).

It didn’t take long for us to put together what happened to our stuff and like an angry mob looking for vigilante justice we headed out on a winters night, frenzied as a pack of salivating wolves on the hunt.  We all jumped in the car and drove to his neighborhood in Black Rock. Kim Watts led the charge and she was out for blood. Garth was there, so was Eric, Patrick, Barry and I.  When we got there, we started calling his name from the street like a gang from Westside Story… goading him to “come out and face us”.  We stood in front of his house waiting for him. The entire band was there watching from the snowy street outside of his home, there was no place to run.  We threatened to call the police and press charges unless he came out to talk.

We went up to his door and spoke with his father who initially defended his son. He said that Lenny had done many things for the band that he didn’t get paid for… which was true but then again, in a rock band we all did many things we didn’t get paid for.  That was the gig, everyone knew that going in. Whenever the band got paid, so did Lenny and the other members of our road crew. Once we explained our position, Mr. K. eventually forced Lenny to come out and that’s when we threatened to have him arrested and prosecuted for theft if he didn’t return our stuff that same night.  He was very scared, apologized and then and gave us back our equipment but not unscathed.

Earlier that day when he brought our equipment inside his house he immediately began working to engrave and paint the name of another band on all of it.  The name of that band was “TRYXX”.  Oh man, we were pissed… this was Parousia’s equipment and now we had the name “Tryxx” engraved on our microphones and painted in big white letters on our P.A. cabinets… that was not cool!  And to this day, we still have microphones that say “Tryxx” on them.  Hey, does anyone know a band named “Tryxx”?  If yes, we have some mic’s to sell, cheap!