Parousia recorded at Select Sound on two separate occasions and both times were done in a rush… not to say that’s bad.  Opportunities knock at the strangest times and hey, sometimes you just gotta roll with it… On February 18th at 9:00 am, Parousia was notified by Starstream Records that our song, ‘MissOgyny’ was chosen to be on the first 97 Rock “home-grown” record album.  This was a big deal for us.  It meant lots of airplay on WGRQ FM, a major ‘album-oriented rock’ radio station in Western NY.

There was one catch; Starstream records required that we submit a 24-track master of the song asap… problem was… we only had the four-track version recorded at Randy’s studio. 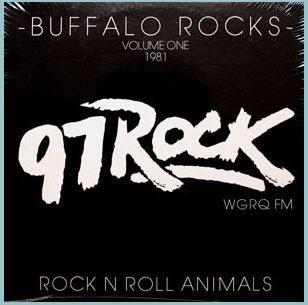 The scramble was on… our only choice was to book time at a local 24-track studio that same evening and cut another version of the song.  And so, on February 19th at 3:00 am, Parousia re-recorded ‘MissOgyny’ on 24-track at Select Sound Studios in Kenmore NY.  It was an exhausting session and highly compressed in time (and on the mix), but we made the deadline and ‘MissOgyny’ made it onto the album.  The 97 Rock LP was our first and only vinyl recording of Parousia. 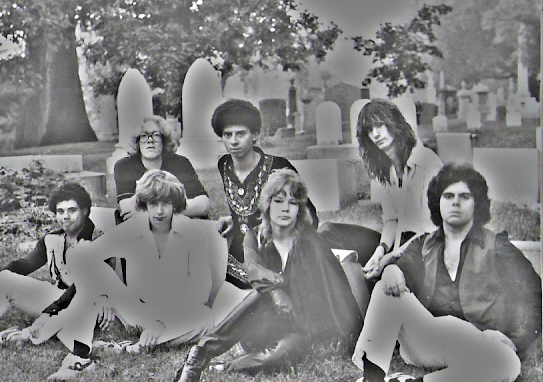 When Parousia reformed in 1983 after a brief breakup in 1982, we all agreed to accomplish one goal;  Record original music and create unique shows to promote that music to fans on the college circuit across the U.S.

After recording four new songs at Loft studios in 1984 and creating a music video, we hit the recording studio three more times in 1985 starting with Filippone sound, where we recorded six songs and then again at Select Sound where we recorded ‘Place your Bets’. Parousia, Creatures of the Night, 1984

On a rainy fall evening I received a phone call from Dick Bauerle who attended Parousia’s concert at Riverside Park back in June.  He liked our original songs and asked if the band would be interested in recording a track at Select Sound.  It wouldn’t cost us anything and in the end we would have a professionally recorded and produced 24-track recording.  How could I refuse such a generous offer?

The idea was that we would record a song using professional engineers and then Dick’s audio engineering students would come in do their own unique mix-down as part of their course curriculum.  Dick Bauerle himself did the final mix for us when all was said and done. 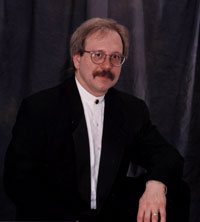 We set up in the studio and recorded the backing track and vocals for one song, ‘Place Your Bets’ in less than two hours!  The engineers were stunned but hey, we had been in the studio quite a few times just recently and we knew how to prepare.  For this song, Robert Lowden played lead guitar along with Garth Huels.

Garth played the meat of the song and Bob’s avant garde style weaved a melodic and haunting track throughout.  Dick, not knowing what to do with such a bold guitar track, wanted to delete it altogether from the mix.  I insisted that we keep it and after much experimentation, Dick successfully integrated the part and it sounded great.  (Thank God, because I couldn’t imagine telling Bob his track didn’t make it and ended up on the cutting room floor!) 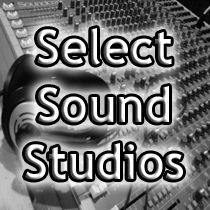 Not long after the Select Sound session, we picked up a band manager, Colin Hilborne, who suggested he produce three new songs to compliment the “Place your Bets” track.  We agreed and in November we began recording at the studio of his choice, Mark Studios in Clarence, NY where we laid down “Turnaround,” “Tiffany” and “Graduation.”  The result of which formed our first commercially released Cassette EP, titled “Turnaround”.  Turnaround was released in October of 1987 on the ‘Rock Dog Records’ label in Hollywood, CA. 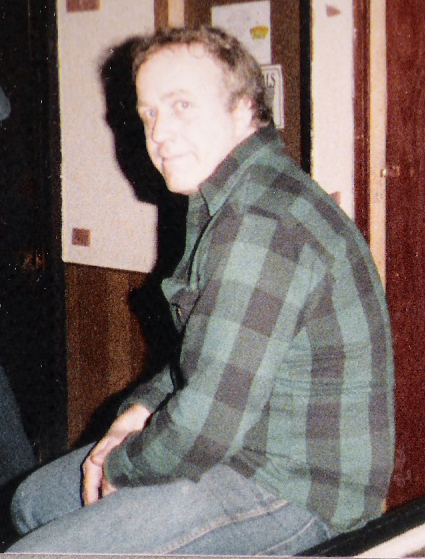 The Turnaround EP was available in Buffalo at: Play it Again Sam’s, Record Theatre, New World Records, Record Mine, Record Connection, Home of the Hits and Terrapin Station and available in Los Angeles at: Rhino Records, Bleeker Bob’s and Second Time Around on Melrose Ave. 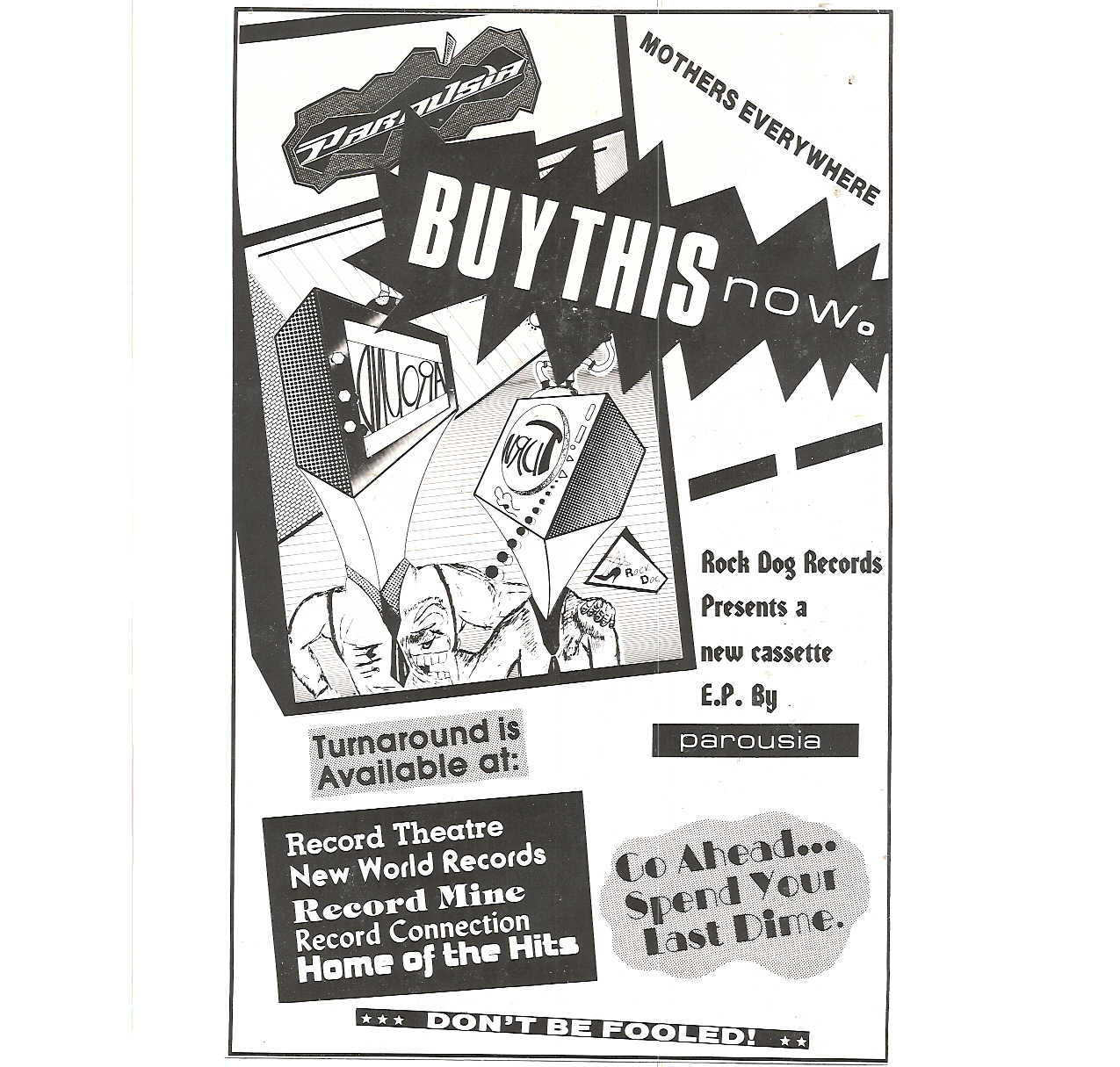 The song Place Your Bets received generous airplay on many major FM radio stations including KLOS and KROQ in Los Angeles.  An interesting comment was made about the song in a column called “On the Beat” from Buffalo’s Nightlife Magazine, “Up Next is Place Your Bets and if you must name another band for a frame of reference this song suggests Missing Persons.”  That was very flattering since I loved Missing Persons! The song was also well liked by Dale Anderson from the Buffalo Evening News, where he said in his review, “In Place Your Bets” they do a credible job in invoking Yes and Asia, showing more verve that the groups which inspired them, by rights they should have stretched it out to a six or seven minute extravaganza.”

Funny he said that because Parousia was trying hard to move away from six and seven minute ‘extravaganzas’ (like our track on the music video “Keep Running”).  There was intense pressure on us bands from the major record companies and radio stations to record catchy and interesting songs that were three to four minutes in length and we feel we successfully rose to the challenge when we wrote and recorded ‘Place Your Bets’. 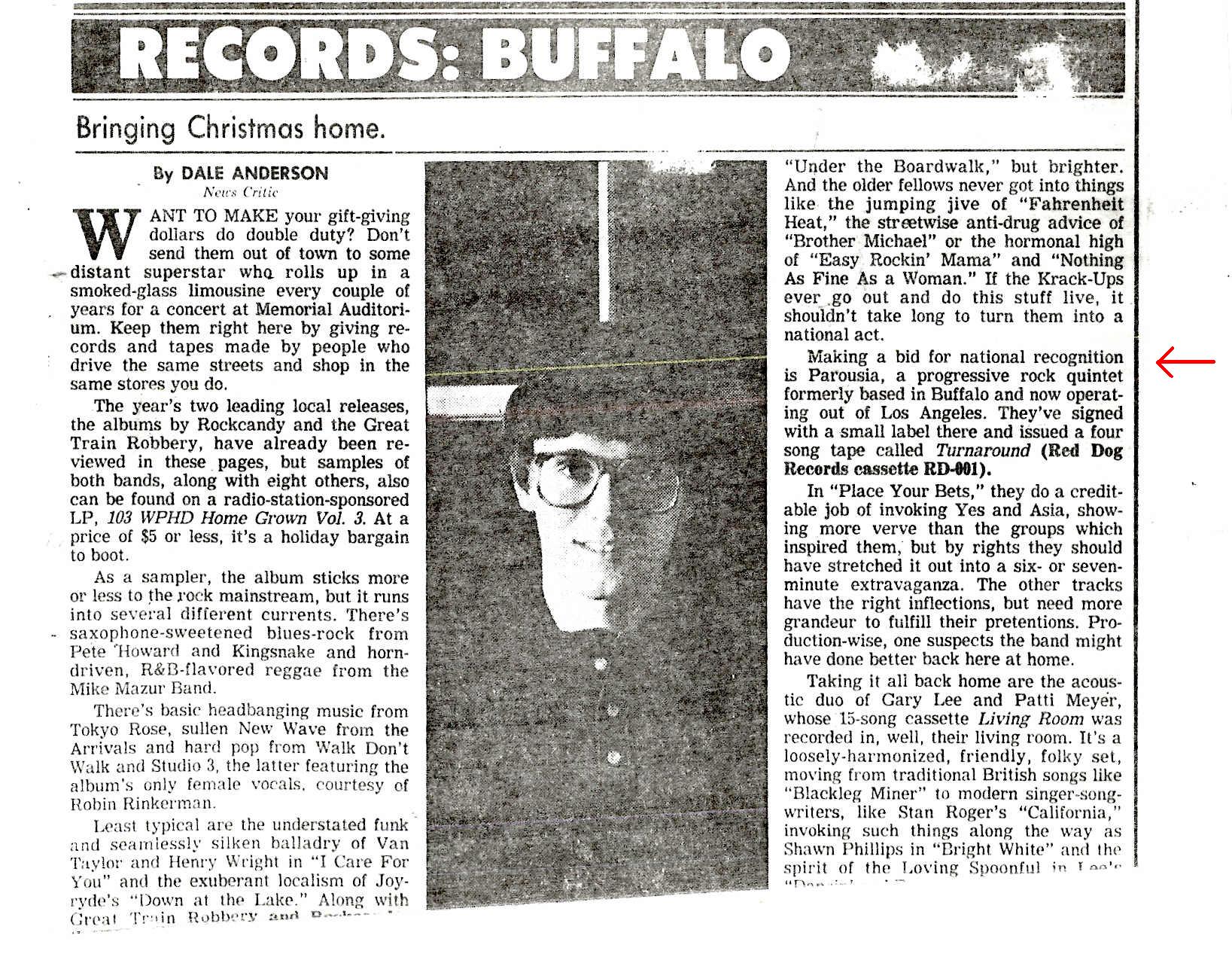