After Parousia parted ways with guitarist Dudley Taft, bassist Gary Lee and keyboardist Marty Leggett in April of 1990, Patt and I decided to go back to the drawing board and start over.  It was just the two of us now. The same two that jammed all afternoon and evening to songs by The Who, Jethro Tull, Herbie Hancock and Black Sabbath, blasting from a cassette recorder in my garage on Baxter Street, Buffalo, NY. 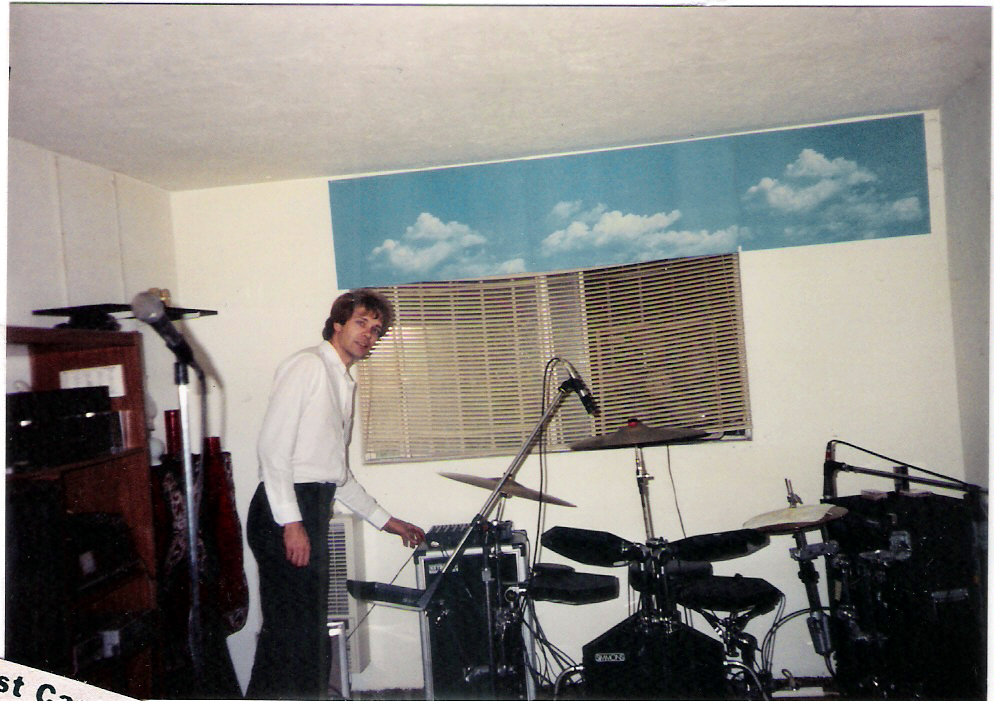 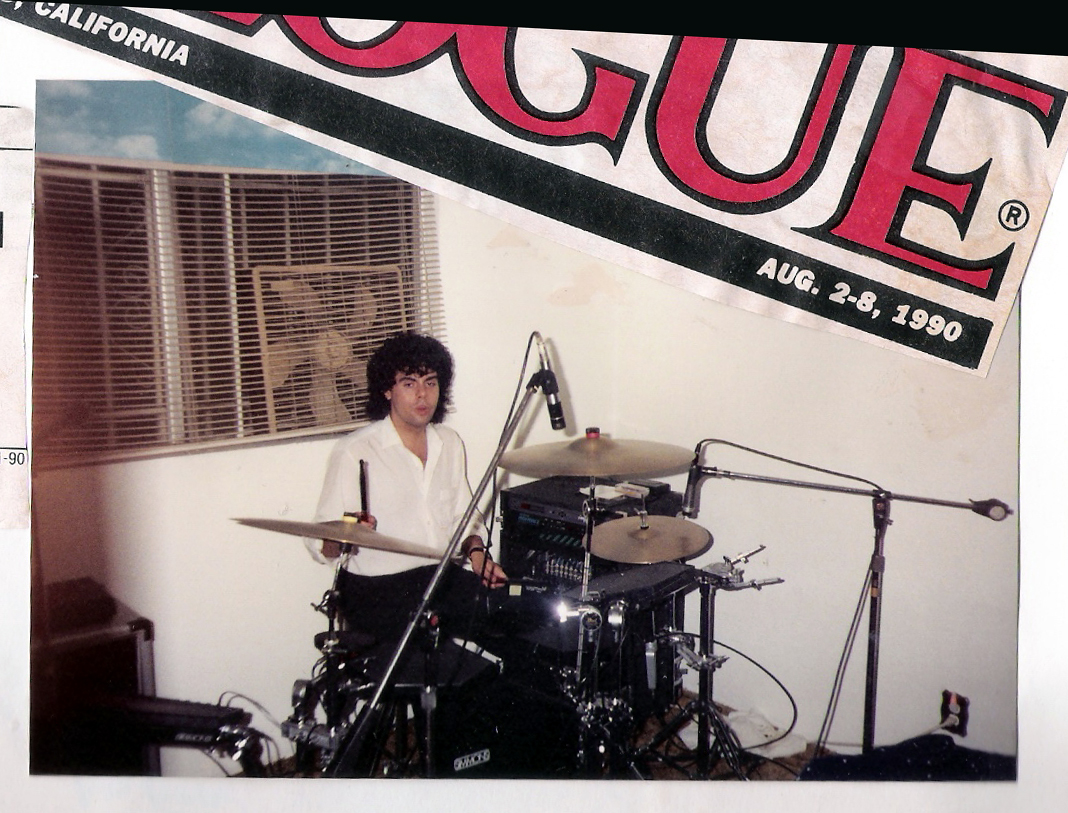 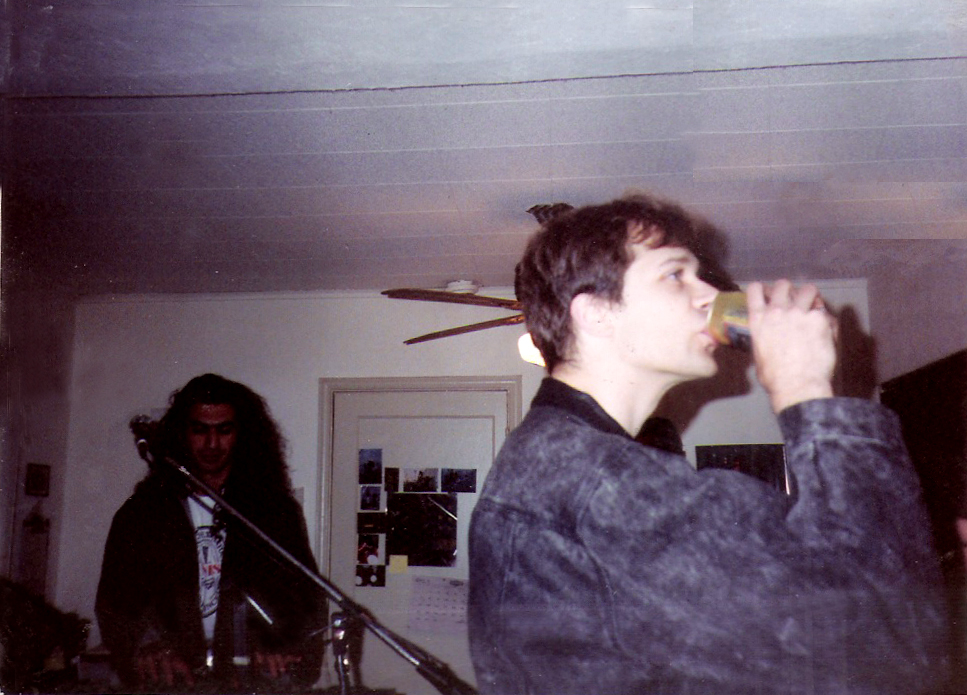 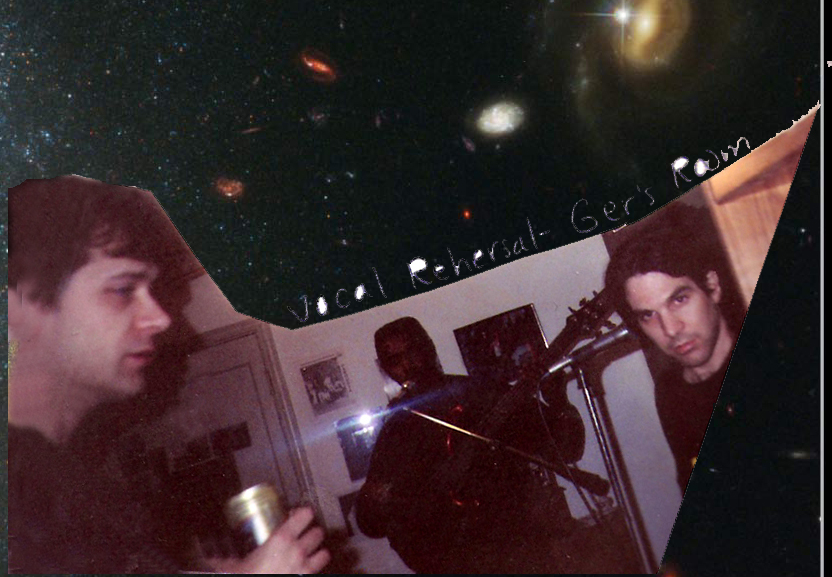 We examined our early music roots and the bands that inspired us.  On average, we appreciated quality songs and musicianship above all.  It was especially intriguing to us when an artist developed an album of  songs into a show that told a story, like Alice Cooper’s “Welcome to My Nightmare” and The WHO’s “Tommy”.  From a musical and visual standpoint, it seemed like a great idea and it became a concept that we adopted as artists; a challenge that we would strive to meet throughout Parousia’s career as a rock band. 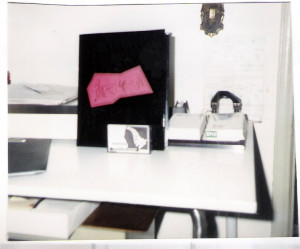 Now, it was time to re-think what we were doing. It was the early 90’s and hair-bands were still a-plenty around Los Angeles and all the rage nationally. We were going to steer clear of looking and sounding like a “metal-band” and went for a more diverse set of songs including progressive rock, pop-rock, hip-hop and heavy rock.

Patt wrote an outline for the plot. In it he weaved together a rock play that was themed around the latest buzz in technology, Virtual Reality.  We wanted something grand, with scenery, props, costume changes and catchy songs that weren’t lame.  Patt wrote the songs and we both wrote the lyrics. We worked on several times a week and It took us about three months to lay it all out.

We wrote and recorded a demo of the music in my studio at 1819 N. Berendo Street in Los Angeles.  Back then I used a Simmons SDS9 and Roland R8M drum module to lay down the tracks along with keyboards, flute and vocals.  After we had enough songs to tell the story we began to design the look and advertise for musicians that could also act on stage.

We wanted to remain a rock band first and foremost. We had envisioned something like the Tubes or Alice Cooper and how they incorporated their theatrics into their set of music and that’s what we had envisioned. Our goal was to attract audiences from both the concert-going crowd and the theater-going crowd.  To achieve this, the songs were written simply as you would find in any current Broadway play like “Wicked” or “Rock OF Ages”.

Once we put it all together and ‘stepped back’ to take a good look at it we saw that we created a performance that fell somewhere between the WHO’s Tommy and “the Rocky Horror Picture Show”… (which at the very least is interesting and entertaining).

Finding the right artists to put the show together wasn’t difficult. Living in L.A. there’s no shortage of quality musicians although we did have to go through a handful until we found those with the talent and the chops to pull it off. 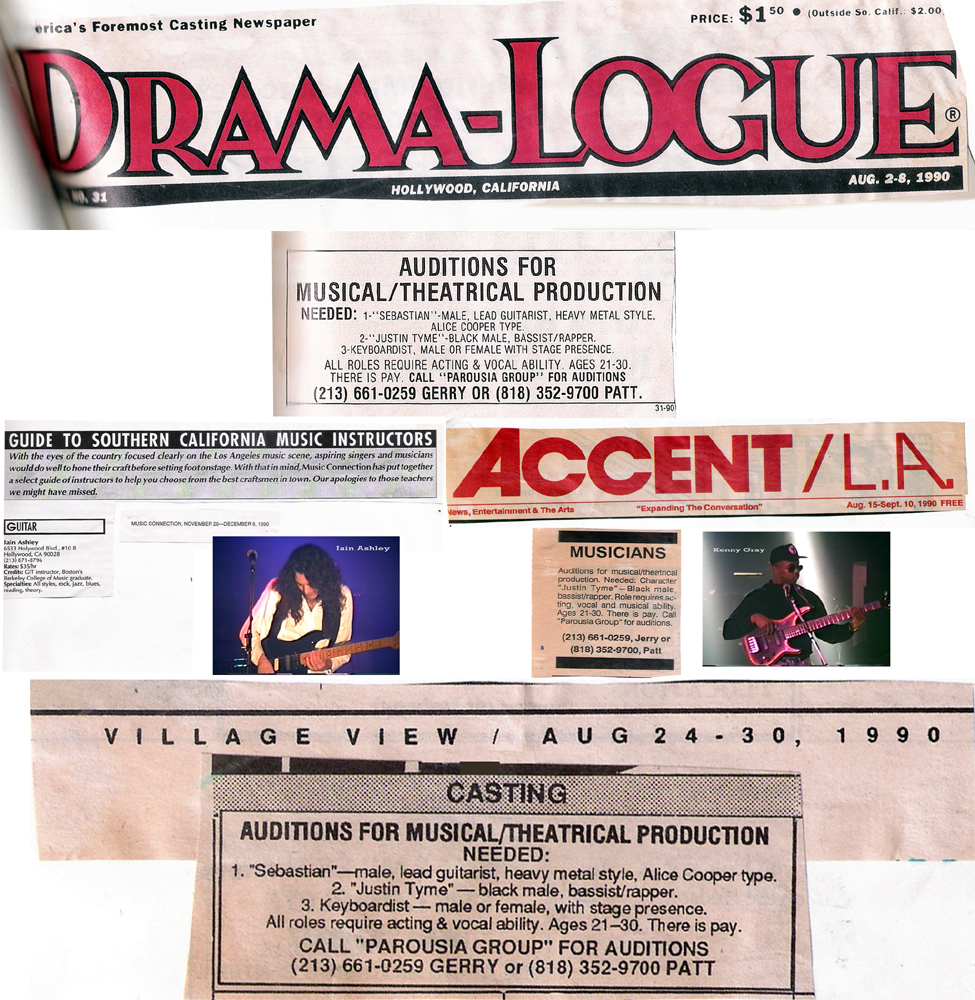 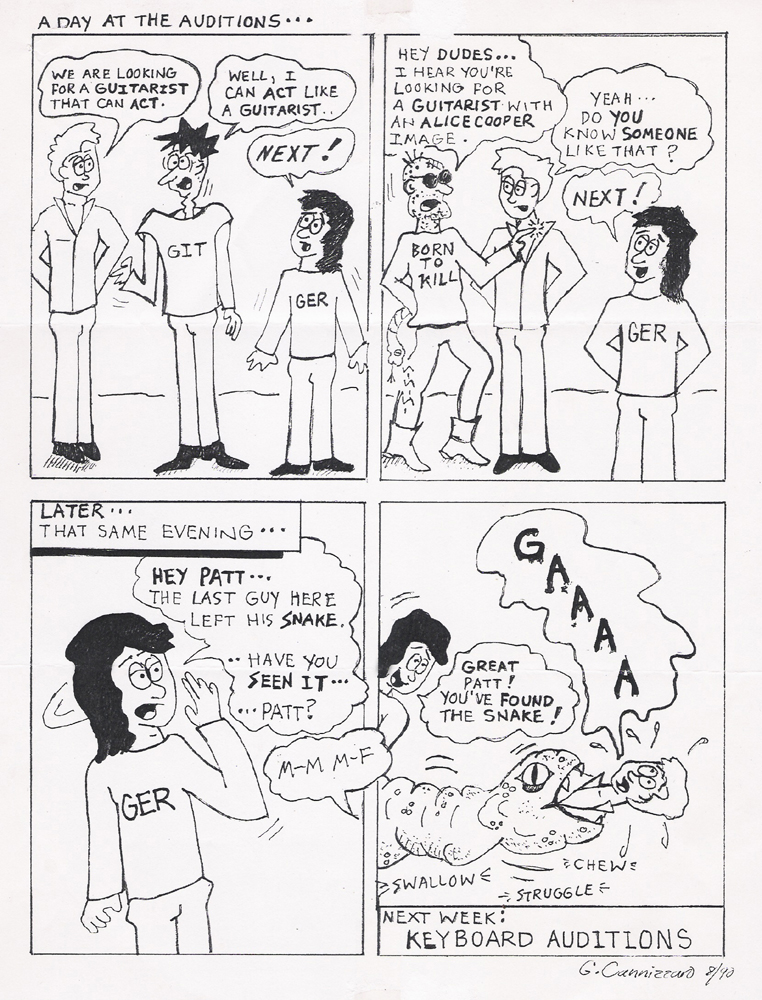 Initially we brought on board guitarist Iain Hersey.  We wanted to rehearse the music with the guitar first and then bring in the rest of the band. Iain picked it up in no time. He was a guitar teacher at the Guitar Institute of Technology on Hollywood, so this was child’s play for him.

Next we brought in bassist Kenny Gray and keyboardist Jeremy Yerimian, both excellent musicians who picked up the material right off the raw-demo tape.

The dancers were under the direction of Claude Connolly. She choreographed the girls and designed the costumes. She had the girls dress in layers so that costume changes can be done quickly on stage or behind a mini-partition next to the stage.

Some of my roommates on Berendo Street became the road crew, Rob Rader, Lisa Hendershot, Bill Simms and a mutual friend, Bobby Force plus, whoever else was hanging around… we put them to work! 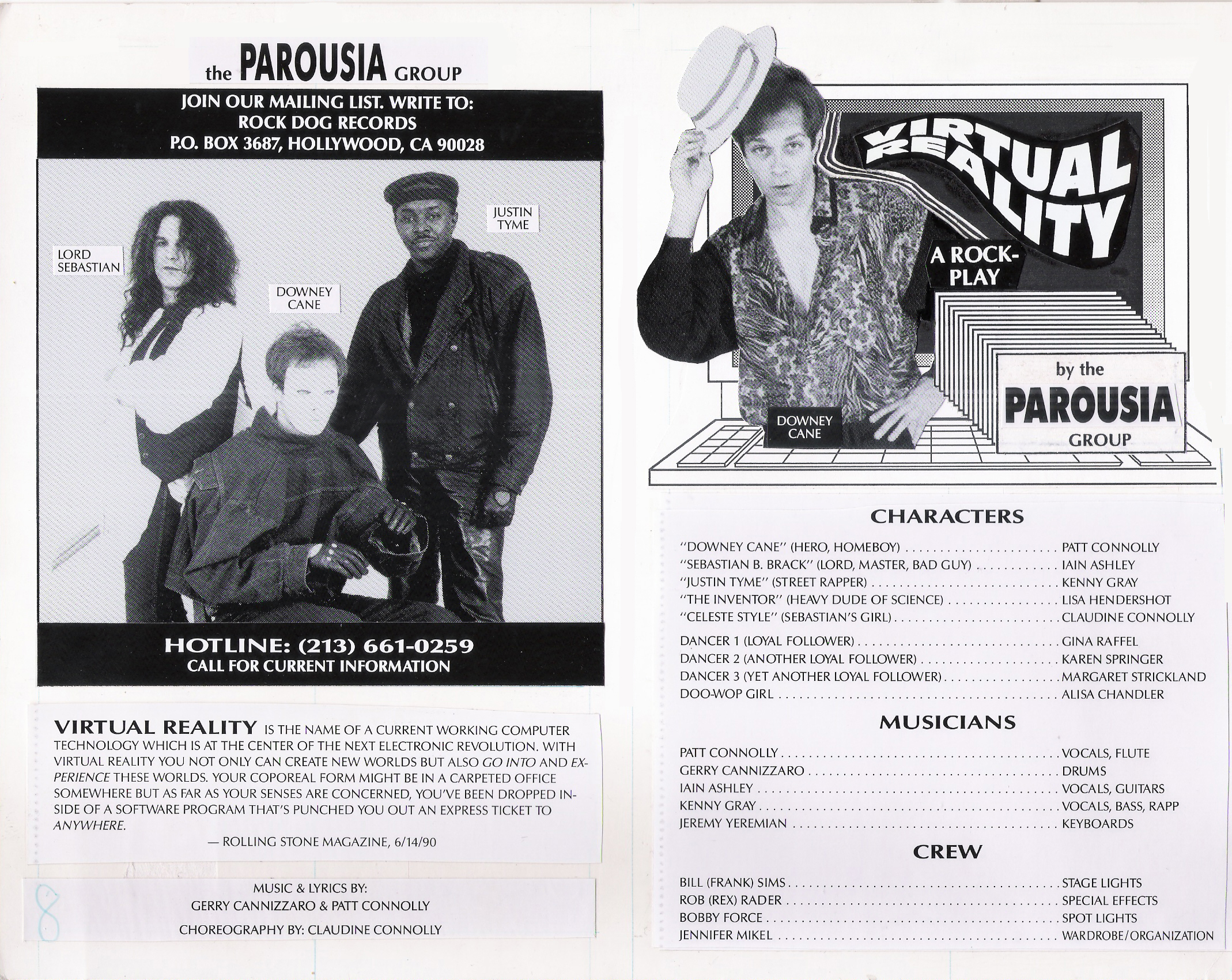 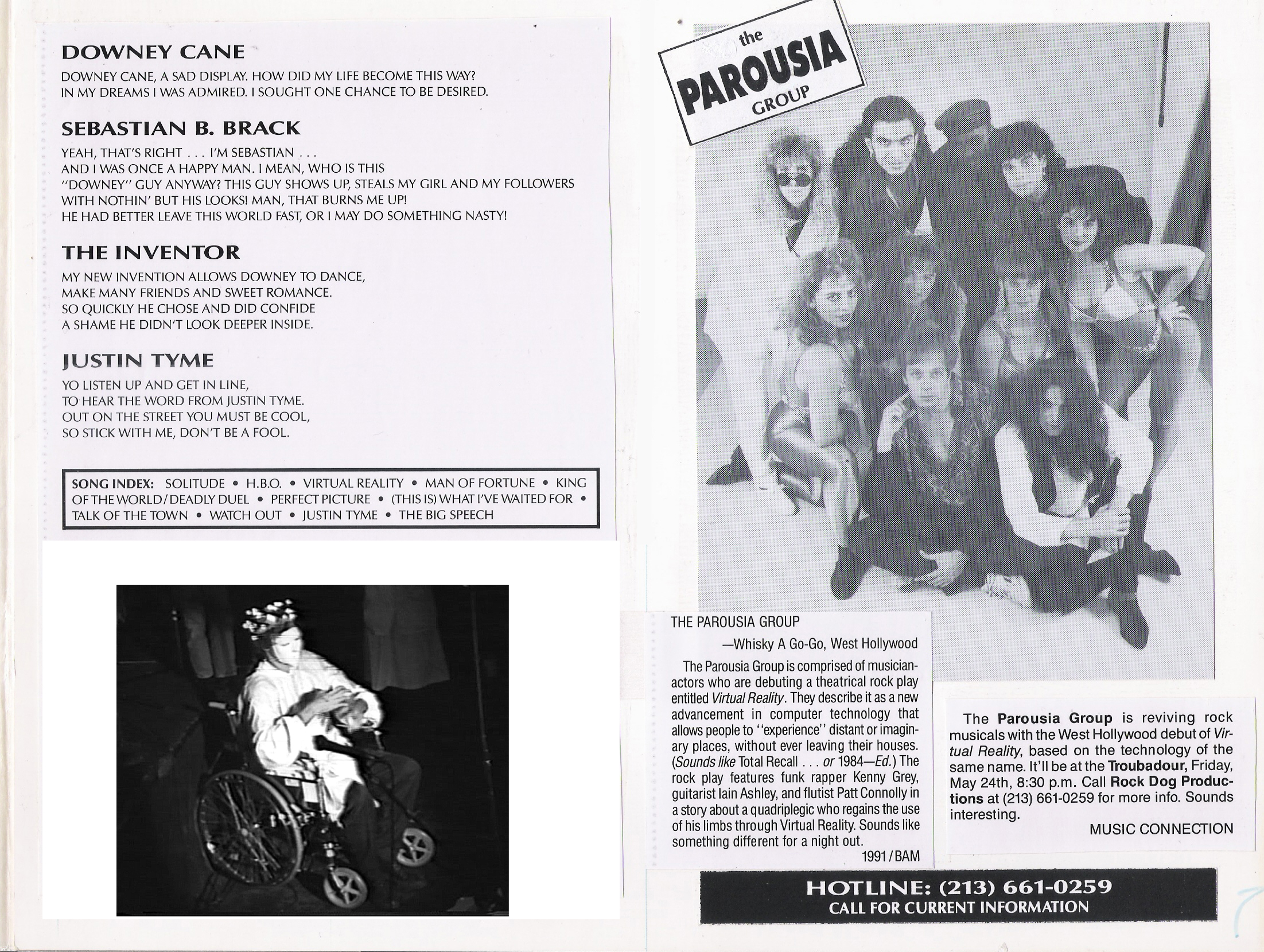 Parousia and its entourage suddenly grew to the size of 15 people. We rolled into clubs like Barnum and Bailey’s Circus!    Since 1975 Patt and I dreamed of putting-on a huge rock-show and we did it!  Now, all we had to do was get it out there into the clubs on the Sunset Strip and see what the audience and the Music Industry execs thought of it.

Setting up the ‘Virtual Reality’ show was an art form all its own, we had 15-minutes max to get everything on stage, hooked up, tuned up and then go-go-go!  After we finished our set, we had about five minutes to break everything down and get it off the stage.  Otherwise if you didn’t, your stuff was being thrown-off by the house stage-crew.